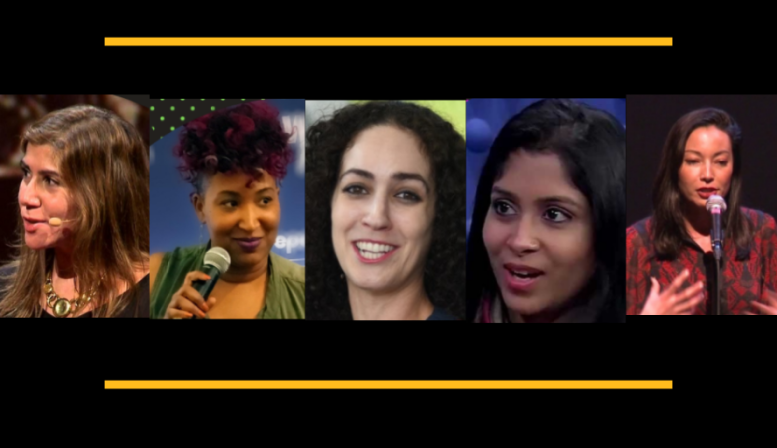 Many women are at the forefront of innovation.

From artificial intelligence to self-driving cars, women leaders are working behind the scenes and building the technology of the future.

Still, we have a long way to go.

According to the National Center for Women & Information Technology, only 26% of the computing workforce in 2017 were comprised of women, and less than 10% were women of color.

Tech companies remain mostly male-dominated, but the gap continues to close as more women leaders stand up and make their voices heard.

Hearing powerful, women’s voices who have experience in the tech industry can be the inspiration that others need to step up and succeed on stage.

Below is a list of inspiring female tech speakers who are not only disrupting the industry, but also captivating audiences with their motivational messages.

Bindi Karia: the “Queen of Startups” 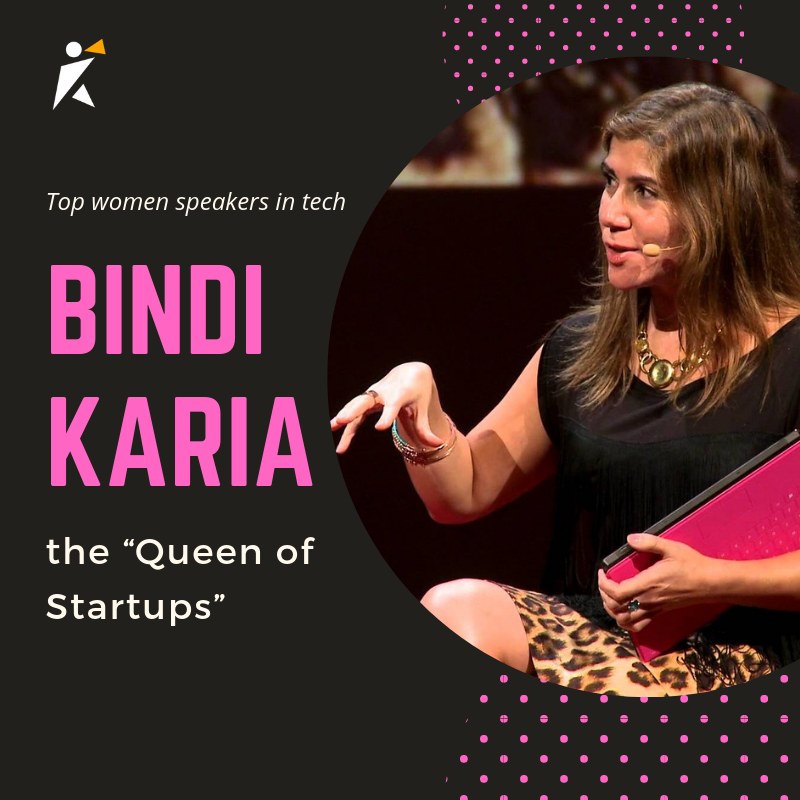 Known as the “Queen of Startups,” Bindi Karia is a strong advocate for women in tech and is passionate about all things technology and entrepreneurship.

Born in the United Kingdom but raised in Canada, the London-based entrepreneur is now the founder of the Boutique Advisory Firm and currently sits on the advisory boards of seven startups, as well as one Venture Debt fund.

Bindi is an incredibly inspiring speaker who can tell a great story.

When she realized that she wasn’t happy working at an organization in the financial services industry, she made the bold decision to quit and leave her well-paying job to pursue her real passion: connecting startups, investors, corporates and governments.

Any woman who is considering embarking on her own entrepreneurial journey will be inspired by Bindi’s story.

Any on one who has taken the risk to become an entrepreneur will  relate to Bindi’s story, and Iothers who are struggling to find motivation and passion in their current work will be inspired to make a change by hearing her story.

Bindi’s story is powerful because it’s relatable for many women who are having trouble taking a leap of faith to become an entrepreneur.

Bindi is honest, genuine and doesn’t gloss over the hardships she endured to finally realize her dreams, which makes it easy to empathize with her.

Women of color are vastly underrepresented on the tech scene.

To combat this issue, Shelly Bell founded Black Girl Ventures (BGV), an enterprise which creates access to capital for black and brown women.

Shelly, a serial entrepreneur and author, is passionate about helping women of color get the support they need to launch a successful business. In addition to hosting events for BGV, Shelly speaks regularly on panels, conferences, and other events to motivate women to start and grow their businesses.

Shelly has a background in performance poetry, as well as K-12 education and computer science. This combination has made her a talented and impactful speaker.

She developed a motto early on: “Resist the urge to be average”, which helps her remain memorable to her audience.

Just like a business has a mission statement, a professional speaker can benefit from a motto that guides their actions and choices.

A motto such as Shelly’s “Resist the urge to be average” is beneficial not only in helping her build her brand, but is inspiring to her audience as well.

Mottos that are short and easy to remember can help you be more memorable.

Margaux Avedisian: the “Queen of Bitcoin” 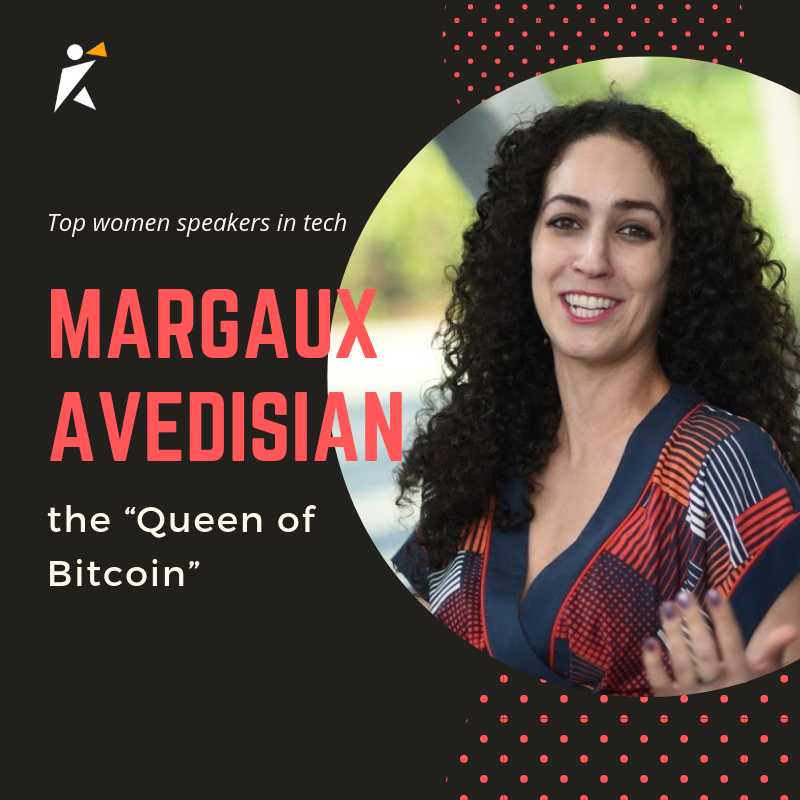 Margaux Avedisian, aka “the Queen of Bitcoin,” is no stranger to speaking in front of crowds.

The investor, entrepreneur, and advisor performs regularly at comedy clubs, poking fun at cryptocurrency and about being a woman in the tech industry.

Margaux has worked at numerous startups in San Francisco and has launched a couple of her own.

Her experience in the tech industry and witty sense of humor allow Margaux to both inform and entertain audiences.

This unique combination gives her credibility and respect as a woman in tech.

We think that anyone who appreciates the tackling of tough subjects with humor will adore Margaux.

Let’s face it, it’s easy to take a more negative approach when talking about being a woman in the tech industry.

Using a touch of humor is an effective way of lightening the mood with your audience while educating them at the same time.

Keep in mind that humor is subjective and how it is received will depend largely on the audience. Understanding when it’s appropriate to use humor and when it should be reined in is key to becoming a great speaker like Margaux. 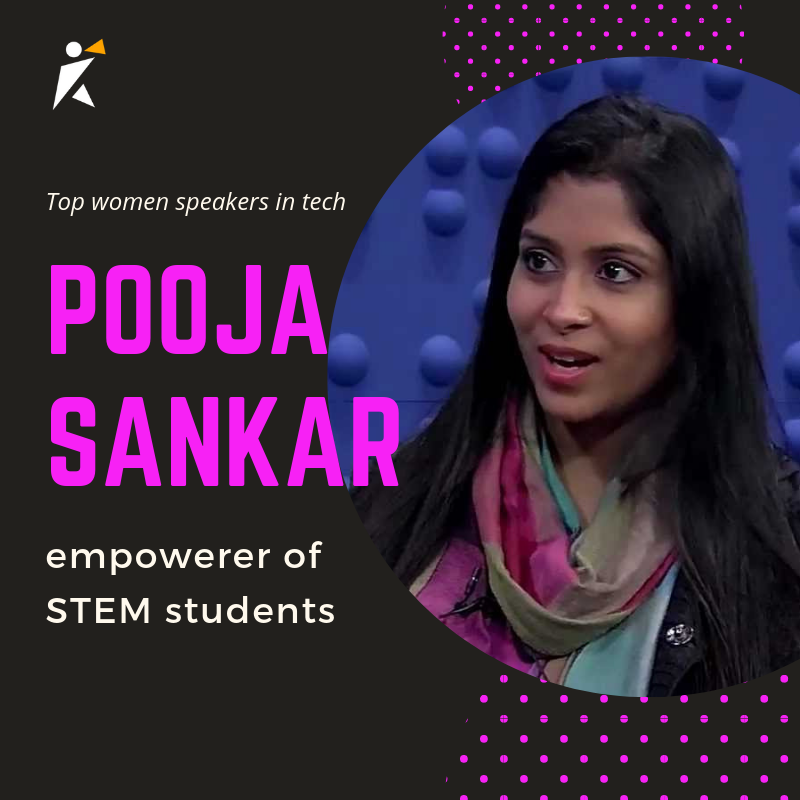 When Pooja Sankar was a female undergraduate studying computer science, she encountered a problem that many women in the tech industry face: feeling isolated from groups based on her gender.

Boys would benefit from collaborating to solve homework problems, while Pooja was left to struggle on her own.

Instead of feeling bitter about the experience, Pooja created a solution to her problem.

Pooja is the definition of scrappy. The entrepreneur managed to build Piazza on her own with zero funding or help.

Who hasn’t felt like an outcast at some point in their lives? Pooja’s story will speak, not only to women in tech, but to anyone who has been isolated at school or in their career.

The best rising female tech speakers are bringing more to the table than a motivating message—they’re bringing solutions.

Pooja used her experience to provide a solution for girls (and boys) in school who struggle as she did.

Focus on building up your own credibility before conveying a message. Your audience is far more likely to take you seriously when you share exactly how you’ve helped women in tech succeed. 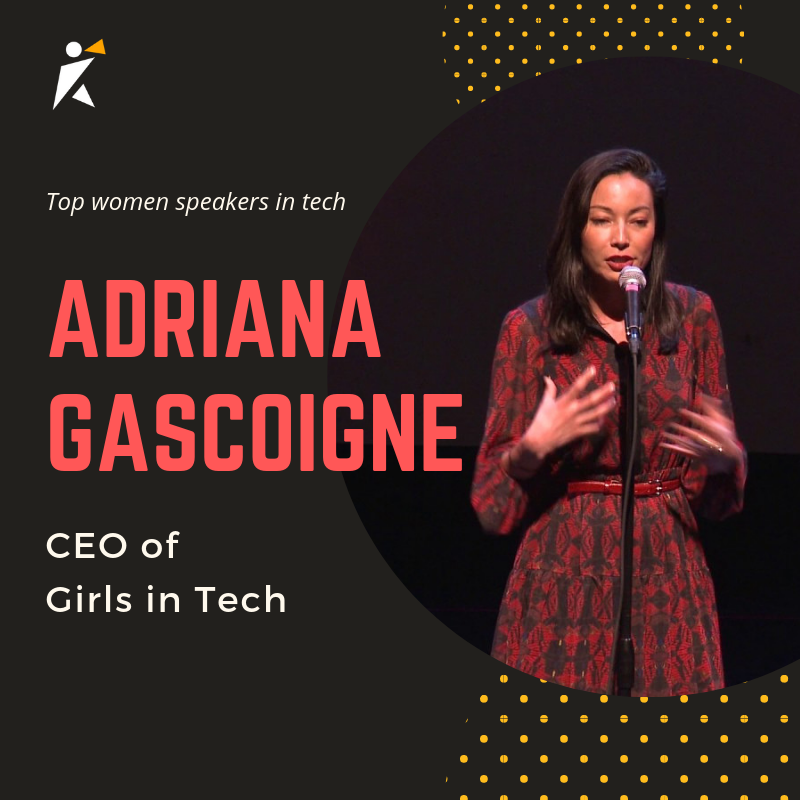 Adriana Gascoigne is the founder and CEO of Girls in Tech (GIT), a nonprofit which encourages more women in tech to come together, collaborate, and seek out new opportunities.

Launched in 2007, the San Francisco-based startup now has more than 100,000 members, chapters in 60 cities, and has a worldwide presence.

Adriana is passionate about bringing more girls into the tech industry, and it shows in her professional speaking.

Unlike those speakers who sound over-rehearsed, Adriana sounds like she is speaking from the heart—because she is.

This is particularly true on when she’s discussing topics such as the toxic culture of Silicon Valley, her parent’s inspiring immigration story, or the problem of unconscious bias in the workplace.

Why she inspired us:

Adriana is not afraid to tackle hard or polarizing subjects—she jumps right in and is sharing a message that isn’t always easy.

And while not necessarily tech related, we really respect Adriana’s bravery in talking about immigration.

Immigration is a topic that can cause an immediate and intense reaction, but Adriana handles the topic with power, empathy, and grace.

While it may sound obvious, focusing on crafting a message that you feel passionate about can elevate your speaking.

The best professional speakers are often activists too, many dedicating some of their precious time to nonprofit organizations.

The Future is Feminist

These five women know the importance of having more women at the table.

Although we’ve made significant strides in the last few decades, there is still a long way to go.

By creating an inspirational message for girls and women, we can continue to inspire and motivate them to join the tech industry. With more examples of womens’ leadership, we can finally begin seeing more equal representation in the workforce.

About the Author:
Katherine Began is currently a Director at Polycase, a premier manufacturer of enclosures for the electronics industry.

Amy donated a kidney to a complete stranger and dared to believe in the impossible!

Be entertained, moved to tears, laugh out loud and LEAVE CHANGED! Kendra Von Esh delivers it ALL!