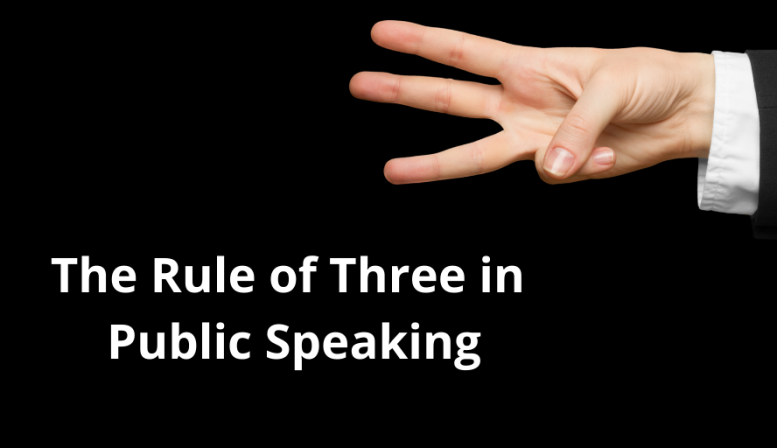 “Never before in the field of human conflict was so much owed by so many to so few.”

What do each of these phrases have in common? They all use the rule of three.

The rule of three is a public speaking hack that’s easy to use and which can make a huge difference to your presentations. But what exactly is the rule of three and how does it help? Let’s investigate.

What is the Rule of Three?

The rule of three originated as a writing trick which argued that three events or characters are more humorous, dramatic or effective than other numbers. We see this in action in everything from the three witches in Shakespeare’s Macbeth to the Three Musketeers and even the Three Little Pigs.

The idea is that using a group of three makes things more memorable because it’s the smallest number that’s required to create a pattern. Two isn’t quite enough, as James Bond author Ian Fleming noted in Goldfinger, writing, “Once is happenstance. Twice is coincidence. Three times is enemy action.”

Because use of the rule of three is so widespread in writing, it didn’t take long for it to spread to public speaking. After all, many of the best speakers work in partnership with speechwriters, enabling the two to play to their strengths.

You might notice the rule of three being used in comedy too, especially for the old jokes that feature an Englishman, an Irishman, and a Scotsman or a blonde, a brunette, and a redhead. As politically incorrect as those jokes might be, they do show how effective the rule of three can be for delivering a punchline.

The rule of three has even been adapted for other mediums, such as photography. The idea is for the photographer to think of the frame as being divided into thirds both vertically and horizontally to better compose the final image.

The Rule of Three in Public Speaking

But we’re here to talk about public speaking, not jokes or photography. So how can speakers adopt the rule of three and put it to use at keynotes, pitch meetings, and important presentations?

Well, the rule of three has been a favorite amongst public speakers for centuries, and some speakers even have reputations as ardent users. For example, Martin Luther King Jr. would use the rule of three multiple times in a single speech.

In his book Our Masters’ Voices, Dr. Max Atkinson explained that public speakers often use the rule of three to create “claptraps”, his term for speech elements that are designed to elicit applause from the audience.

So why is the rule of three so effective? 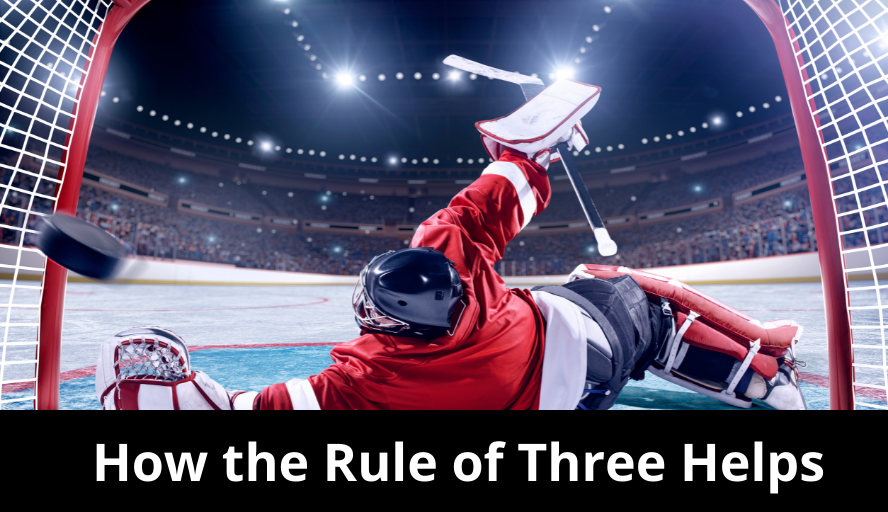 How the Rule of Three Helps

The human brain looks for patterns, which is why we experience pareidolia, the phenomenon in which we see faces in things. It’s also what causes us to be superstitious.

Let’s say that for three games in a row, your favorite sports team scores a goal while you’re in the bathroom. Before long, you’ll end up rushing for the toilet every time your team is losing, in the hope that it’ll somehow help them to score.

This knack for pattern recognition is hardwired into our brains, which is why the rule of three can be so effective for public speakers. It allows you to take advantage of a quirk that’s as uniquely human as our desire for stories.

As for the question of why it’s the rule of three and not the rule of two or four, it’s pretty simple. Two items are too few to form a pattern, and while using four does work, it’s also less effective. Much of public speaking is about brevity and communicating as much information in as few words as possible. Following the rule of four adds unnecessary wordage, and because there’s more for people to remember, it’s less likely to stick in their heads.

This simplicity is what makes the rule of three so powerful, and it’s why we see the number coming up in all sorts of unexpected places. In physics, we have Newton’s three laws of motion, while in music, we have the concept of triads and three-part harmony. Most stories, whether we’re talking about books or movies, follow the three-act structure of a beginning, a middle and an end.

Let’s round things off with a few more famous examples of the rule of three.

Famous Examples of the Rule of Three 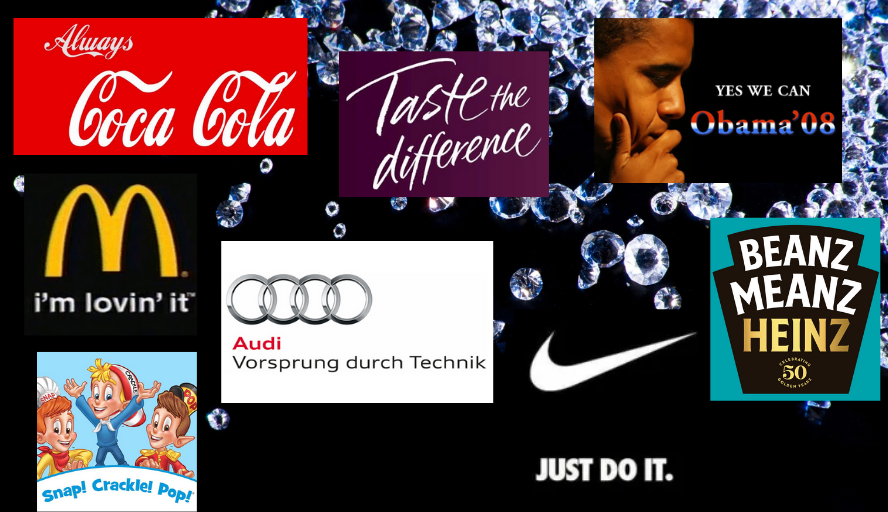 The rule of three is particularly common in advertising, because marketers have learned that they can exploit it as a way to get people to remember their messages. How many of these do you recognize?

The rule of three is even used in the Declaration of Independence in the phrase, “Life, liberty, and the pursuit of happiness.” In fact, it’s super common in politics and was also used at the Gettysburg Address when Lincoln talked of “government of the people, by the people, for the people.” 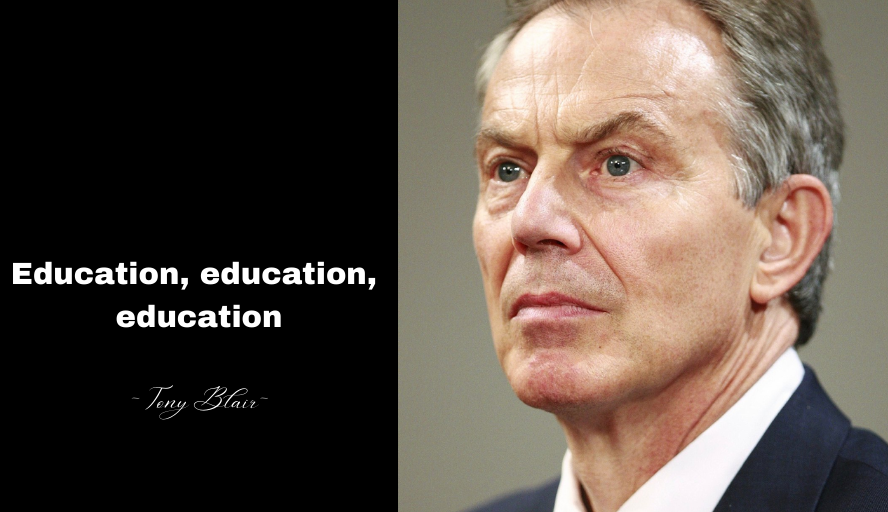 Former UK prime minister Tony Blair used it in his catchphrase, “Education, education, education.” France’s national motto translates as “liberty, equality, fraternity.” And depending upon your opinion of Donald Trump, it might interest you to note that “Make America great again” follows the slightly less efficient rule of four.

Now that you know a little bit more about the rule of three and how it can help you to be a better public speaker, it’s over to you to put what you’ve learned into practice.

Implementing the rule of three is as easy as ABC, which is another classic example of the rule. It requires just a small change in the way that you talk, and yet it can have a huge impact on how you’re perceived and whether people remember what you say.

The chances are that you’ll now start to see the rule of three everywhere, and you could do a lot worse than to pay attention to the way that people use it so you can learn from them and apply it to your own public speaking.

In the meantime, we want to hear from you, so be sure to keep the discussion going by letting us know about your favorite examples of the rule of three in the comments. Until next time!

Simon Vetter, CEO of Stand Out International, is a behavioral change expert, working with managers t