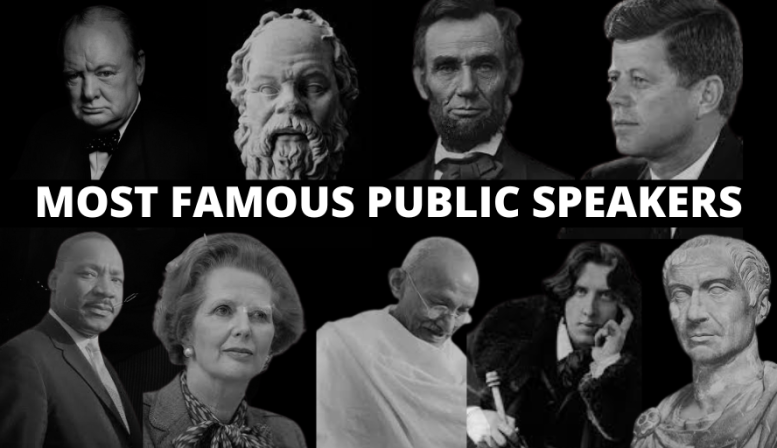 In today’s article, we’re going to go ahead and find out.

Winston Churchill is arguably the most famous public speaker of them all, mostly due to the pivotal role that he played in leading the British through the Second World War. Churchill had to be a good speaker because he was leading a nation through one of the most traumatic experiences imaginable, and many of his most famous speeches are still part of popular culture today. He was also a master of using the rule of three, which we’ve talked about in previous articles.

Socrates is a great example of a groundbreaking public speaker because he lived thousands of years ago in a time long before the discipline had been studied and best practices established. He became a memorable speaker through practice and hard work, dedicating his life to speaking to people and espousing his philosophical theories. He even died for his beliefs, after being sentenced to death for corrupting the minds of young Athenians.

Abraham Lincoln is another great example of a politician whose words have lasted far longer than the man himself. In particular, the Gettysburg Address is studied by public speakers from all over the world, and it’s just a shame that we don’t have any recordings so that we could analyze the way in which the speech was delivered.

John F. Kennedy was an incredible public speaker, at least later on in his life, although it took him a lot of hard work and practice to get there. In many ways, he can also be compared to Winston Churchill, because his public speaking engagements took place against the backdrop of the Cold War against the USSR. Kennedy was also able to inspire the American people to begin their quest to travel to the moon, with the first landing taking place just under six years after Kennedy’s assassination.

Speaking of assassinations, no list like this would be complete without a mention for Martin Luther King, the civil rights activist who’s most remembered for his iconic “I Have a Dream” speech. Like Socrates, King eventually died as a result of his beliefs, but the time that he spent with us was enough to cement his reputation as one of the most skilled orators of all time. You could do a lot worse than to analyze his speeches.

Love her or hate her, Margaret Thatcher was a skilled public speaker who acted as the prime minister of the United Kingdom during the latter half of the 20th century. She rose to the most high-profile job in the country at a time during which there was even less equality between the genders. Her speeches are perhaps a little less well-known than those by some of the other names on this list, but she’s definitely worth learning from regardless.

Mahatma Gandhi started out as a lawyer and learned public speaking on the floors of courts before going on to become a resistance figure who led India to independence from the British through a campaign of nonviolent resistance. He’s another great example of a man who lived and died based on his beliefs and who was able to use the art of oratory to rally support for an important cause.

People often forget Oscar Wilde when they think of public speakers, in part because he’s thought of more as a playwright and a wit than as a speaker. With that said, he was also known to deliver lectures, and he’s a great reminder that we’re practicing the art of public speaking whether we’re standing up in front of millions on live television or whether we’re having a quiet discussion at a dinner party. Public speakers who want to be successful and remembered could do a lot worse than to learn from and to imitate Oscar Wilde.

Julius Caesar is like Socrates in that he’s a great example of a successful public speaker who rose to the top of his field back before the rules and best practices of public speaking were codified. He was able to lead the Roman Empire during a tumultuous time and is still remembered for many of his most famous speeches, including the iconic line, “I came, I saw, I conquered.” You’ll notice that this uses the rule of three, too.

Now that you know our picks for some of the most famous public speakers in history, we want to hear from you. Do you agree with the people we’ve ranked in our list, or do you think that we’re missing someone who deserves to be there?

As always, be sure to let us know in the comments so that we can keep the discussion going, and don’t forget to follow us on your social networking sites of choice so that you don’t miss what’s coming next. We’ll see you soon for another article!

Explore a future of opportunities and ethical issues in VR, AI, and Metaverse developments!