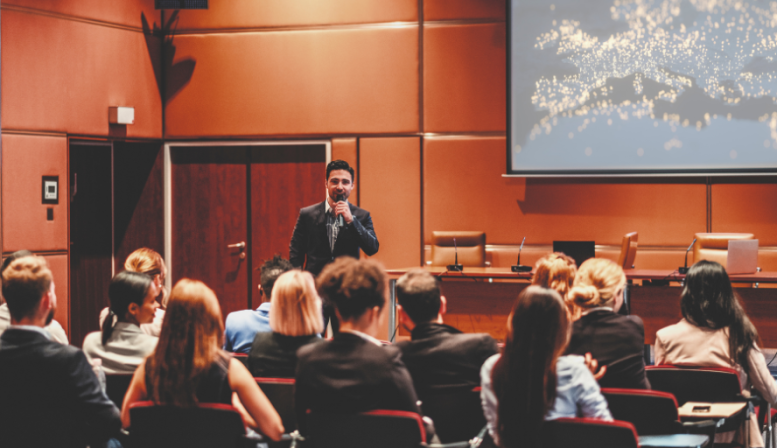 This is a question that we hear often, and it’s also one that we’ve spent a lot of time thinking about. After all, there are a lot of great arguments on both sides.

But should public speaking be mandatory in schools? And what are some of the pros and cons of this as an approach? In today’s article, we’re going to take a closer look at the arguments so you’re better armed to consider this question. Let’s get started: 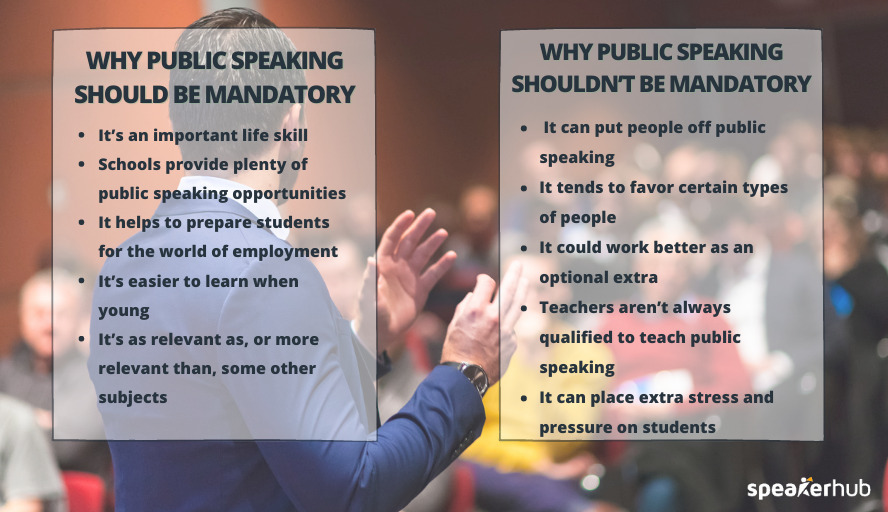 Why Public Speaking Should Be Mandatory

We’re all aware of how useful public speaking can be as a life skill, and the fact that it’s useful both in the workplace and in your private life. For example, most of us will find ourselves delivering a toast at a wedding or giving a speech for someone’s birthday at some point in our lives. Learning to do this at a young age can give people a stronger start in life and also ensure that they’re well prepared for these kinds of events when they come round.

3. It helps to prepare students for the world of employment

Public speaking is essential to today’s workplace, and with good reason. It doesn’t matter what our job is, the chances are that we’re going to be required to stand up in front of people and talk at one point or another. The idea is that by making public speaking a mandatory part of public schooling, we can better prepare students for the world of work and ensure that they have access to the tools that they’ll need to be effective.

4.  It’s easier to learn when young

Studies show that young people learn more easily than older people, and so teaching people the skill of public speaking at an early age can make it much easier for them to pick it up. It’s the same logic behind why we teach foreign languages in schools, because it’s better to get started early than it is to leave it until late in life. Given that public speaking is such an important skill, it just makes sense to help people pick it up while their brains are still young and adaptable.

5.  It’s as relevant as, or more relevant than, some other subjects

This is neither the time nor the place to criticize school curriculums, but we think it’s safe to say that there are things that people learn at school that don’t come in useful later on in their lives. That’s why people often say that kids should be taught to manage money or raise children rather than learn what a sine and a cosine is. It doesn’t seem like a stretch to suggest that we could find some less relevant subjects that could be replaced by public speaking.

Why Public Speaking Shouldn’t Be Mandatory

1. It can put people off public speaking

Perhaps the biggest downside to making public speaking mandatory is that it forces kids to practice public speaking whether they want to or not. In the same way that you’d probably get sick of it if your parents fed you cabbage every day, forcing kids into public speaking can backfire and lead them to hate doing it before they ever give it a chance.

2.  It tends to favor certain types of people

3.  It could work better as an optional extra

Many critics of mandatory public speaking in schools point out that it might work better if it was an optional extra. Instead of forcing all students to take the course whether they want to or not, it might be more successful if it was an optional extra course later on in their education. This would also ensure that it was self-selecting, and that the people who took the course were only taking it because they wanted to be there.

Public speaking requires a certain set of skills that regular teachers aren’t always equipped with. True, most teachers are public speakers themselves due to the very nature of teaching, but that doesn’t mean that they know how to teach other people to do it. For teachers to be able to teach their students how to carry out public speaking engagements, they’ll need a decent amount of training of their own.

5. It can place extra stress and pressure on students

We’ve all found ourselves in high-pressure situations where we’ve had to carry out a public speaking engagement and ended up under a ton of stress. It’s one thing when you’re getting paid to do so, but it’s quite another to put this kind of pressure on students, especially when they have other things to worry about, like their exams and their route to college.

As always, we’d love to know your thoughts on this, so be sure to let us know your thoughts in the comments so that we can keep the discussion going. You can also follow us on Facebook, Twitter and your other favorite social networking sites for more. We’ll see you soon for another article.

Eric is renowned as a speaker, lecturer, author & baseball expert, engaging from keynotes to chats.

"Bobby has been an outstanding panelist, speaker, and connector for all members of our network!"

Non-traditional tech storyteller with a human approach to understanding a rapidly evolving world.