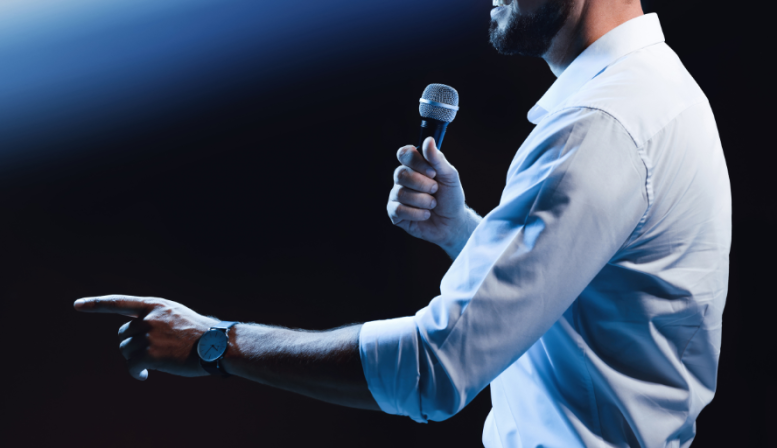 As a public speaker, it’s your job to share information and to inspire people. That can be difficult enough as it is, but the challenge gets even harder when you factor in the need to avoid distracting people from the message that you’re trying to deliver.

Let’s take a look at a few of the most distracting behaviors out there so that you’re better placed to make sure that you’re not using them.

Using too much slang and industry jargon

We’re all guilty of this one from time to time, and certain industries are more vulnerable than others because of how prevalent the jargon can be. You can get away with a certain amount if it’s necessary for you to get your point across and you’re talking to the kind of audience that will understand it, but too much slang and jargon can be super distracting. Try to limit it as much as possible.

Fidgeting is one of those behaviors that we naturally turn to when we feel uncomfortable, and even the most seasoned public speakers sometimes end up fidgeting with their hands or jangling keys or coins in their pockets. The problem is that fidgeting takes people’s attention away from what you’re saying and instead leaves them focusing on what you’re doing with your hands.

This is a mistake that a lot of new public speakers make, because they think that pacing around the stage adds an element of movement and energy to what they’re doing. They’re technically right about that, but the problem is that movement isn’t always a good thing. Unless it’s a deliberate decision to underscore something that you’re talking about, it’s generally better to pick a place and to stick to it.

As human beings, we naturally turn to eye contact when we want to establish a connection with other people. Of course, when public speakers are talking to a large audience, it’s impossible to maintain eye contact with everyone, which is why it can be a good idea to let your eyes roam around the room and to make eye contact with anyone that you spot looking at you. It’s all about tapping into human psychology to come across as more trustworthy and believable.

We’ve all seen a public speaker who’s ended up just reading from their slides. This can leave people thinking that they might as well have just sat down and read the slides themselves instead of listening to the speaker. Most people don’t like slides anyway, and the very best public speakers use them sparingly if at all. Slides should act as a visual aid that reinforces what you’re saying and not as a teleprompter.

The passive voice is less direct and to the point than the active voice. It is less dynamic and has less impact. In English, sentences are usually made up from a subject, a verb and an object. In the sentence “John kicked the ball”, “John” is the subject, “kicked” is the verb and “the ball” is the object. Active voice takes the order of subject verb object, while passive voice takes the order of object verb subject. The same example in passive voice is “the ball was kicked by John”.

This one’s an interesting one because what’s considered unsuitable at one event might be perfectly fine at another. Part of your job as a public speaker is to research dress codes in advance and to make sure that you’re dressed appropriately for the event you’re speaking at. If you’re ever in doubt or you need some clarification, you can always look at photographs from previous events, or even better, just ask the organizers.

It doesn’t take a genius to know that if you say two things that directly contradict each other, you’re going to confuse people and leave them wondering whether you actually know what you’re talking about. The problem is that avoiding contradictions is easier said than done, because they can often come up naturally or even indirectly. The good news is that if you plan out what you’re going to talk about in advance and practice your delivery, you can soon iron out any contradictions and keep confusion to a minimum.

Weasel words are any words that don’t add any value but which we throw in anyway to buy ourselves some time. Common weasel words include “um” and “so”. Some of us are also guilty of using weasel phrases, such as “the thing to remember is”, which basically just fill out time without adding anything to the message we’re trying to convey. It’s only natural to occasionally lapse and use a weasel word or two. Almost everyone does. It only becomes a problem when these words and phrases are making up a significant proportion of our talks.

When someone slouches or has poor posture, it sends out a subconscious signal that they don’t want to be there, either because they want to avoid public speaking in the first place or because they just haven’t had enough coffee to get them going. Ironically, it can also be distracting when people stand up ramrod straight and take things to the other extreme, which is why it’s so important to be as natural as possible.

Now that you know a few of the public speaking behaviors that are most distracting for your audience, you’re in the best possible place to make sure that you’re not guilty of using these behaviors yourself.

Remember, your job as a public speaker is to effectively communicate information to your audience. If you use distracting behavior then you’re diluting that effectiveness and reducing the impact that you have when you speak to people.

We’ll be back soon with another article, so be sure to follow us on your social networking sites of choice for more. And as always, we’d love to hear your thoughts, so be sure to leave us a comment to let us know about any other distracting behaviors that you’re aware of. We’ll see you soon!

Speaking isn't about talking to the audience. It is about challenging and inspiring them for change.

Charismatic, insightful, logical, powerful, entertaining - some of the ways audiences describe me...