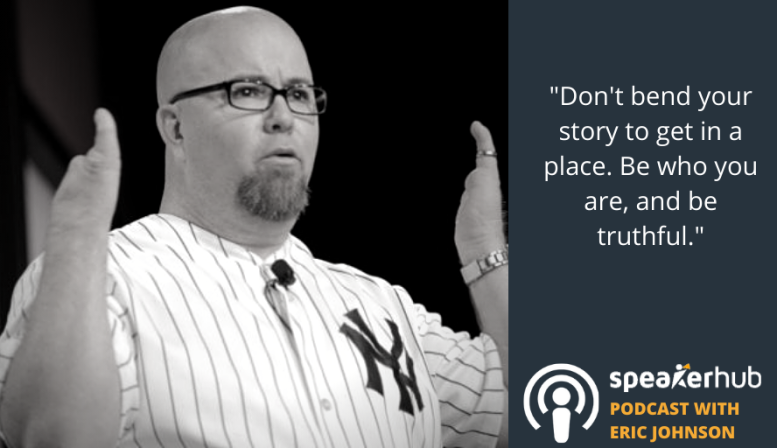 In this podcast, we talk with motivational speaker and pastor, Eric Johnson. Eric has a very unique story that challenges his audience's perspectives and outlooks.

He gives us some valuable advice on how to talk about difficult subjects with humor and storytelling, and what to do if your audience starts becoming disengaged (Spoiler: It might involve jumping on a chair!)

Q: Eric, what topics do you speak about?
A: I cover a range of topics. Something you need to know before this makes any sense, is if you see my picture, or you see me in video, I was born with one finger on each hand, and one toe on each foot, so I'm different. That's the primary topic that I talk about. I talk about overcoming challenges in a world that's designed for five fingers.

I have five kids, and four of my five kids are just like me, they also have one finger on each hand, and one toe on each foot. We are big believers in the word “Yet.” We've taught them as they're going through life, dad I can't do this. No, you just can't do it yet. You haven't figured out how to overcome that challenge. I also talk about how to have fun in life. I could tell you story after story of one finger jokes, and things that have happened to us.

I also talk about technology. I'm a software developer by trade. So I've done talks on technology, development specifically, and development operations. And finally, historically, I'm a pastor. I'm trained in seminary, and I was a preacher for about 13 years, so I also speak on the Bible.

Q: Is that how you got started with public speaking?
A: Well, no, it was kind of the other way around in fact. I've always been known as the funny guy. I've never been the handsome one! I like to tell stories and I see life through stories. I think “Oh, that would make a great story!” or “Oh my gosh, that's so funny, I can really use that to illustrate this.”

I was asked not long out of high school to come speak to an FCA, which is the Fellowship of Christian Athletes. I spoke to them, and then I really enjoyed that, but I also felt called to be a pastor. While the speaking started a little beforehand, the pastoring really helped me mature the talent of speaking.

Q: What attracted you to become a speaker?
A: I'm the extrovert of all extroverts. I get so energized standing in front of a crowd. The more out there, the more energized I am. But more importantly, I feel like I have a story worth hearing. I love to tell my story, I feel like it's encouraging to people. 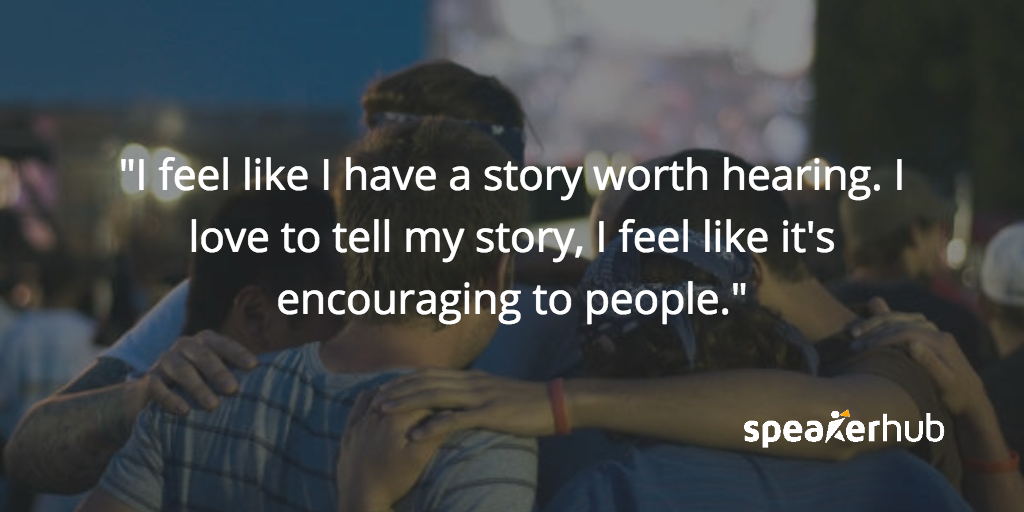 The ultimate reading list: 50 great books that every speaker should read

Q: When people hear your story what's the outcome, what's the effect?
A: It's interesting, as I go through my story, I really challenge people to look at their attitude in how are they approaching life. Are you blessed, or are you cursed? I'm very open about this, I was born this way, it's all I know. It's really not a horrible thing, I actually think it's awesome. I believe that one finger is better.

The reaction I get is mixed, but a lot of what I get is “my problems aren't so bad, look what he's doing.” or “Wow, yes, that's a good point, I give up pretty easy. Have I really tried everything I can do before I say ‘okay, this challenge I'm not going to overcome’?” I couple this by talking about accepting who you are, where you're at.

One of the things we use in our family is “it is what it is.” There are things that are unchangeable. For instance, I'm not going to wake up tomorrow with a thumb, which I'm glad about, that would scare me to death. But I feel like the response I get is “Yes, that's a good approach to life.”  It really doesn't do any good to sit at home and bemoan problems, rather than getting out and living life.

Then I also get a lot, you're funny. 90% of what I do is comedy. But it's not jokes, it's just stories, stories about life. What I get back is “I want to start looking at life like that too. I want to see the stories, I want to enjoy life.” That's the response I get. 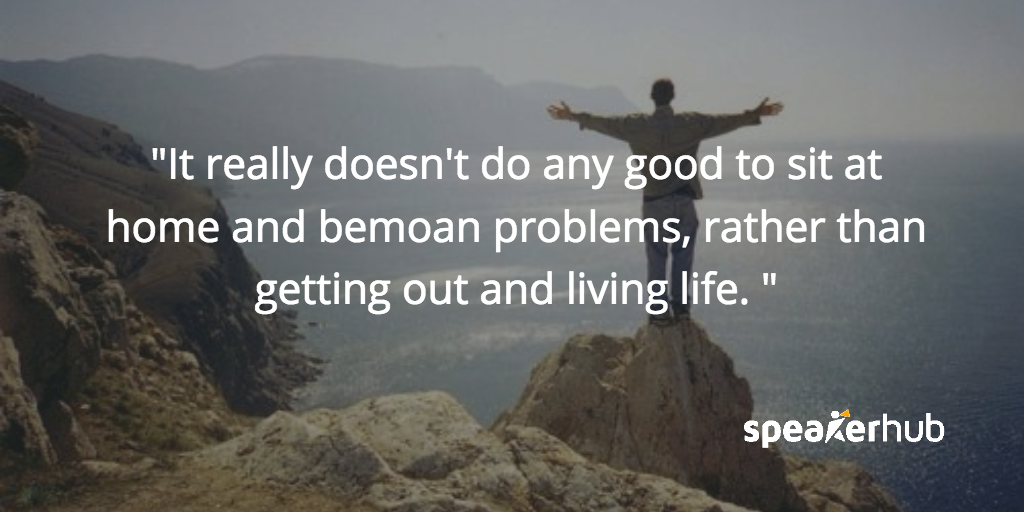 Q: Eric, can you tell me some of the challenges that you've had to overcome when it comes to public speaking in particular?
A: The biggest lesson I learned was understanding my target audience. I have a specific story that I tell, and it hits a very wide range of people, but there are some it doesn't hit. I had to work on knowing who my target audience was.

I was asked to speak in a school one time. It was an elementary school for third graders to fifth graders, and it was the worst event I've ever done. I just shot right over their heads! I thought “I'll make jokes, I'll tell stories.” But it didn't work.

The other thing that I've learned through hard knocks is reading your audience. I'm a storyteller, but I'm a storyteller with a point. That was a hard thing to make sure I had in line, because a lot of the times I just want to make them laugh.

People would say  “You're so funny!” and I would ask “But did you understand what I was trying to tell you?” and they would say  “No, but you were funny.” and I would think “Well, I've failed here.” I had to learn how to balancing out when to tell the story to make them laugh, but when to get serious, and make sure they're understanding the message that I'm trying to deliver.

Q: How do you find that balance? How do you know now I've got that sweet spot? Because it can be a bit tricky I imagine.

A: It is. It's reading your audience, it's putting your pride away. I think that's important to put down your pride, and find out how is this affecting people, and is the message getting through.

I can watch, especially if I'm preaching, and this is a different format, but if I'm preaching I can watch if you're talking through something, and you can see people fading out. That's when I'll slip in the joke, and that brings them back around. It's the ability to salt your talk with the comedy without over salting.

That didn't answer your question. Your question was how do you find that. You find it through hard knocks, you find it just by doing. I don't think there's a specific book you can read that would say “This is how I do it.” You just get in front of a crowd, and you start doing it. 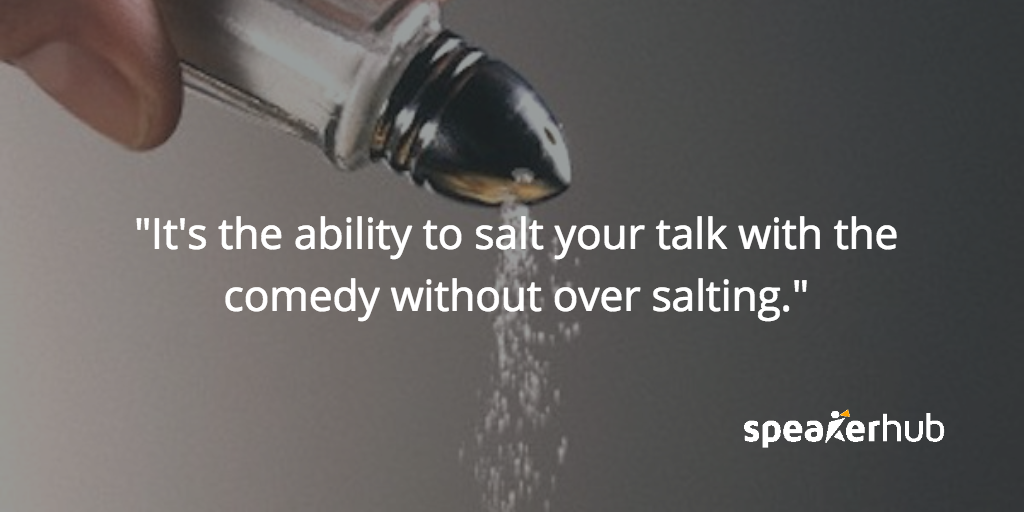 Q: I really liked your insight about actually actively watching your audience. You can see when people are tuning out, and looking at their mobiles, or just a glazed look across their face. Are there any other techniques you use to re-engage them? You talked about telling jokes. How else do you get them to come back on board with you?
A: I do what's not expected. I jump up on chairs. It's always funny, but I tend to do something they were not expecting.

Q: Eric, can you tell me about one of your most memorable talks that you've given?
A: It was actually just recently. I was speaking for a company when I was speaking in London about a month ago. They had me come speak at their sales kickoff, and it was actually in Wembley Stadium, so location wise, it was pretty cool.

But then they had me come back to the company, and we did a very intimate kind of “town hall” session. They pretty much just said “Go as long as you want, do what you need to do!” I talked for about 45 minutes about overcoming challenges. Then we did a Q&A.

The company itself was going through some changes, some growing pains. I had hung out with them the day before, and I had inserted myself into the culture a little bit, enough that they were really comfortable asking me questions.

They ask me things like “How do you keep the attitude going?” and “What do you do when you don't want to overcome a challenge?” We got this very intimate conversation about life. It was me and almost this entire company. It was a great time.

Q: You really enjoyed it because you felt like you had connected with them on a different level, or what made it so inspirational?
A: Yes. It was the “What do you really think.” Usually, organizations have me come in, and I have a specific message I'm going to give, which is a lot of fun, but this time it was more  “Hey, we want your opinion. We look at you and we think you've obviously overcome some challenges, you've obviously got a good hold on this. How do we apply that? Let's take that a step further.”

For me, it's the interaction. When you're speaking to a group it is a conversation, and that's why you keep them engaged, but it's a very one sided conversation because I'm doing all the talking. When I can react to something that they're saying I feel like I get to give them more, and I get more from them. There is more invested one both sides.

Q: Eric, my last question today is just what is one piece of advice you would offer other public speakers about motivating and inspiring audiences?
A: I've seen speakers who just want to be the person speaking. I've seen speakers that are speaking because they really want to tell their story, and they feel like they can help people.

The point for me to speak is to motivate, and tell that story, and help people. Not just to be the guy that gets paid to speak. It’s a fine line, but I think it's important. I guess it boils down to knowing who you are, and sticking to who you are. Don't bend your story to get in a place, don't change your approach just to meet the needs of others. Be who you are, and be truthful.

A bit about our speaker:

Eric Johnson is a public speaker and pastor, who uses his unique outlook on life to motivate his audiences to overcome challenges. He has a condition called ectrodactyly, meaning he has one finger on each hand and one toe on each foot. This difference has shaped Eric’s world view, and changed his perspective on how to overcoming challenges.

Eric uses a blend of comedy, faith, and stark reality to speak with corporations, churches, schools, and clubs. His positive attitude and challenging words have helped individuals and companies overcome challenges and move toward success.

Would you like to find out more about Eric Johnson’s work, or hire him to speak at your next event? Here are some links you might find helpful.

Are you a speaker? You can get more speaking opportunities with SpeakerHub: Find out more about how SpeakerHub works.