What can panel moderators learn from Charlie Rose, Larry King and Oprah Winfrey?

These three master interviewers can teach you how to get your panelist to engage with you, share in-depth knowledge and perspectives, to create discussions worth listening to.

Each of these interviewers uniquely approach how to get to the heart of the subject matter. Their interviews give audiences incredibly interesting insights.

But why look at TV hosts? Aren’t they fundamentally different from a panel moderator?

Panel discussion moderators are responsible for starting the conversation, creating a dynamic flow, making connections, and tying topics together.

These interviewers do the exact same thing.

Both interviewers and panel moderators stimulate interesting conversations and help audiences gain a new perspective and a deeper understanding of the subject.

3 techniques you can learn from Charlie Rose

Rose spends a lot of time on preparation. The questions he asks aim to do more than skim the surface of the topic.

His probing questions get to the heart of the subject, which is why his interviews are so effective.

Rose keeps his questions direct, for example “What do you mean? Why? How did that happen?”

Then he simply leaves them on the table.

More importantly, he never offers potential answers, or give his subjects the chance to dodge or avoid answering. 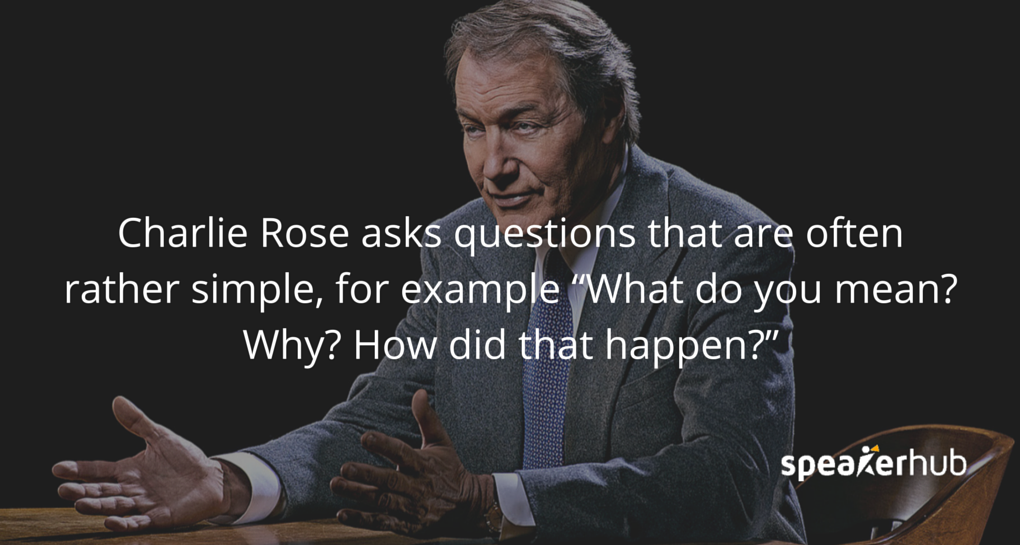 Charlie Rose keeps an element of breeziness to his interviews. They come off with a casual air, while being provoking and profound.

He keeps his tone conversational, which automatically opens up his subjects, leaving them feeling like the interview is seamless. 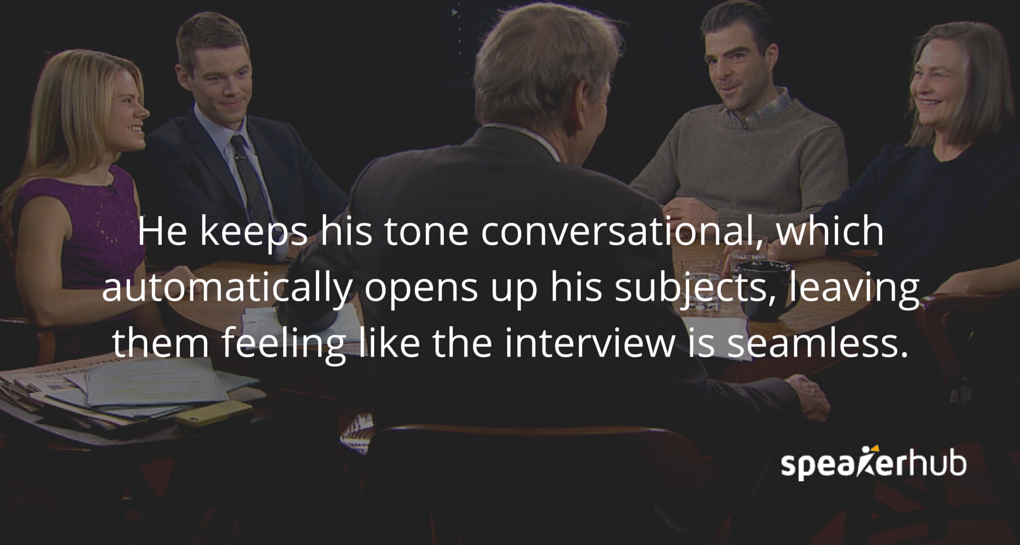 In an article with The Financial Times, Charlie Rose shares his approach: never takes sides during the interviews.

This is an important tool for moderators: if a panelist feels you are against them, they will go on the defensive rather than open up.

Aim to be thoughtful and conversational, rather than confrontational and undermining. 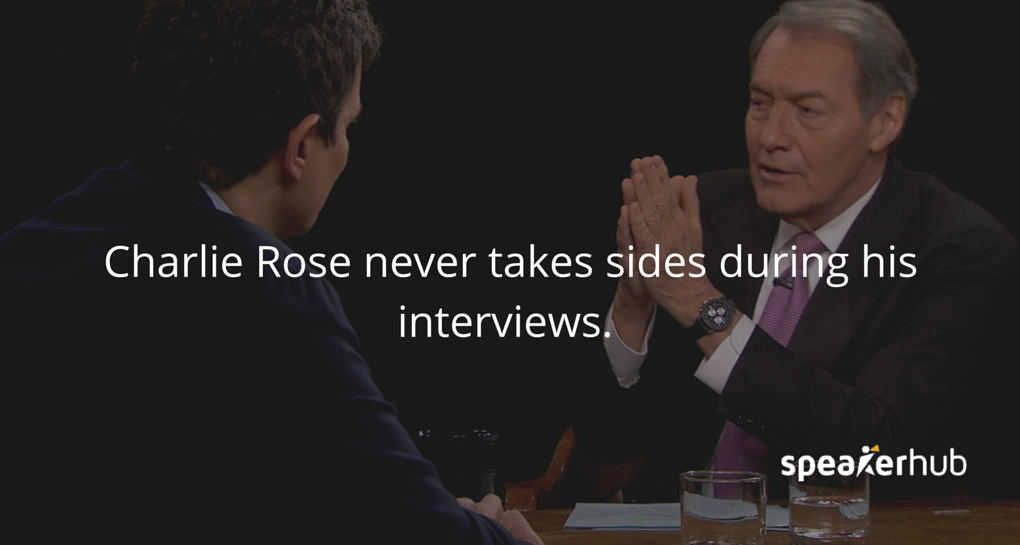 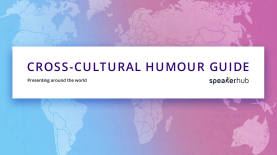 Behind the Curtain: Interview with Agnes Uhereczky

3 techniques you can learn from Larry King

When Forbes asked Larry King “What are your three favorite interviewing techniques?”, he offered this advice:

1. Put your panelists at ease

King stresses that it is very important to make sure the guests are at ease.

Never put the interviewee on the defensive. It might be highly entertaining for the viewers, but you will not get a lot out of your subject.

If you opt for a confrontational approach, the guest might clam right up, get frustrated, or feel like they cannot trust you to show them in the “right light.” 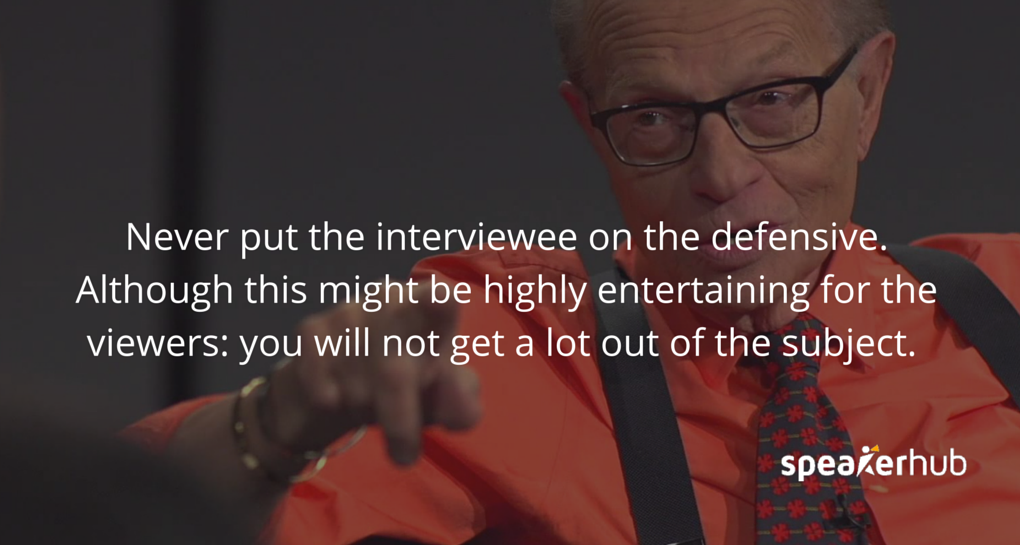 "In the interviewing business, if you've got someone who is very shy or very timid, you switch gears. I had an American flying ace, this is a man who shot down many enemy planes in the war, but when I interviewed him, he was very nervous and he didn't want to talk about it."

Larry ended up switching the conversation to focus more on the nature of fear, "and it made a fascinating interview."

Don’t waste anyone’s time with something that isn’t working. Be ready to switch tracks; be intuitive, and change things up if necessary. 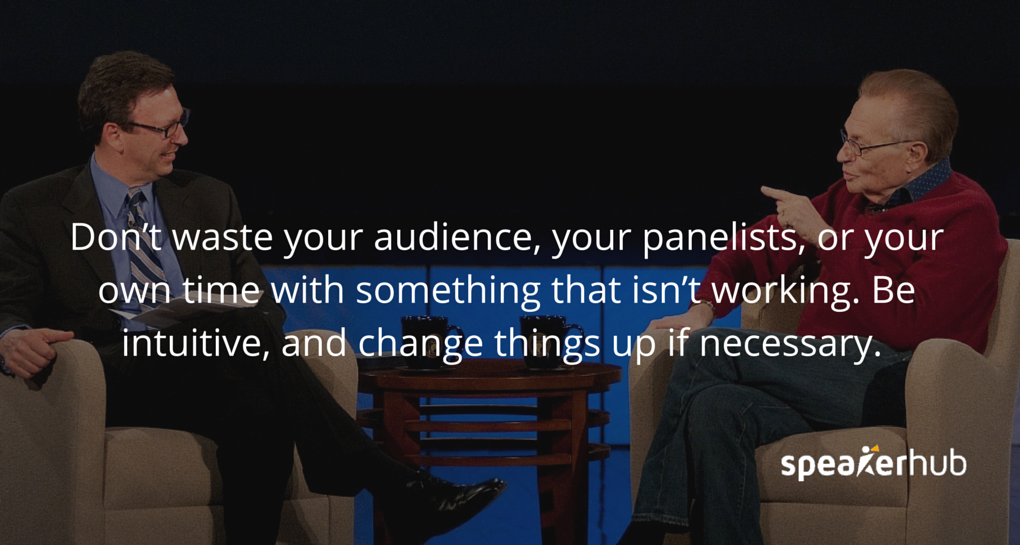 The audience is there to see the panelists, so they need to do the majority of the talking. Keep the focus on the panelist by keeping your questions short and to the point.

The worst way to ask a question is by making a long, rambling statement, then asking the panelist “what do you think of that?”

Make sure you have worded your questions to be as clear, open and straightforward as possible. 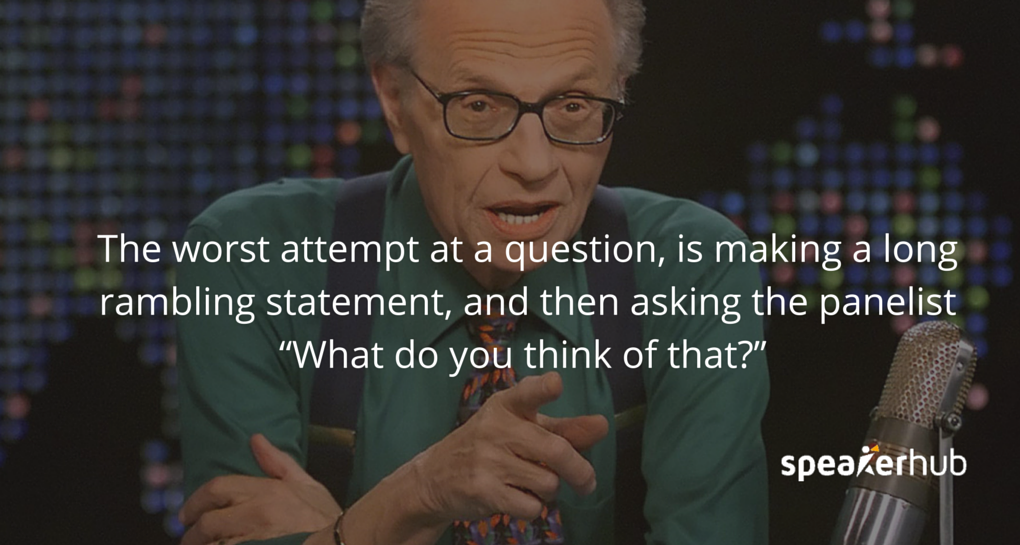 Picking the right moderator for your panel discussion

3 techniques you can learn from Oprah Winfrey

“I always understood there really was no difference between me and the audience. At times, I have had better shoes. But at the core — at the core of what really matters — we were the same.”
-Oprah Winfrey

Study, then reference back to, other interviews the subject has given, or material they’ve written.

Oprah oftens says, “I read that you… Is that true?”

This has a double-pronged effect. First, it makes it clear that you have read up on them, and secondly, it gives you content to work off.

Make a list of insightful questions to work with: but don’t be tied to this list. Instead, get into the heart of the topic by finding the places to dig deeper.

Winfrey focuses on the emotional drivers behind the decisions of her interviewees, which is what makes her interviews so compelling to watch.

She directly asks: “How did that make you feel?”

These type of questions open up the interviewees to feel more comfortable expressing their emotions. 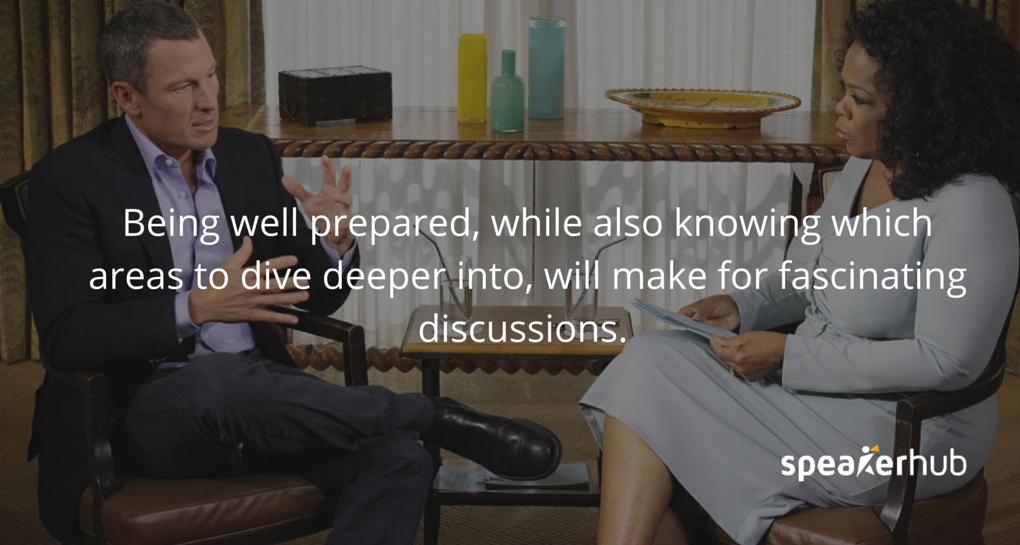 2. Know what your panelists want

Ask your panelists what they would like to get out of the discussion.

This is one of the key techniques that has helped Winfrey conduct truly compelling interviews.

Take the example of the interview where she got Whitney Houston to open up about her difficult relationship with Bobby Brown. Winfrey explains:

It’s one of the reasons she is able to build such a strong rapport with her subjects, they trust that she has their interests in mind, which leads them to offer her their best. 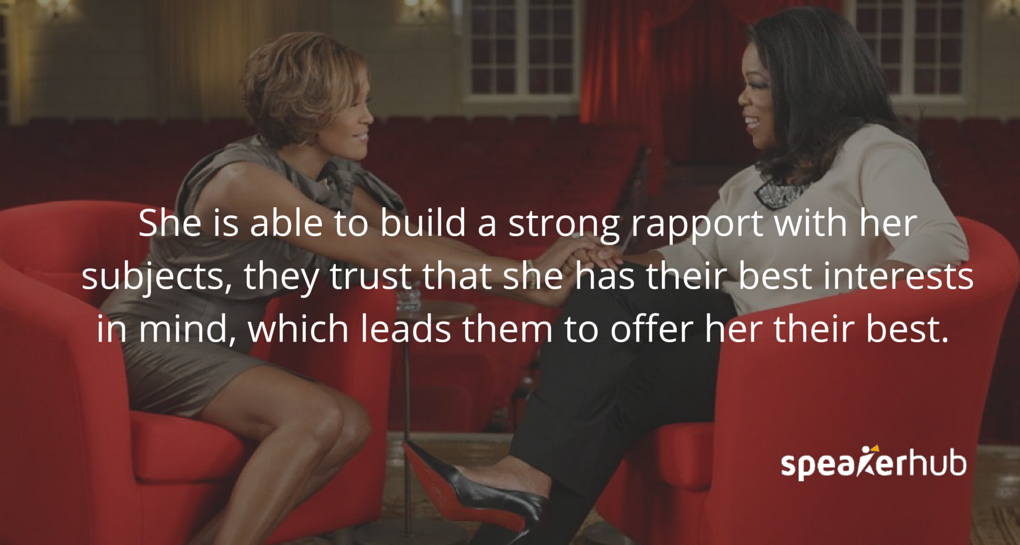 One of the reasons Winfrey’s interviews are so effective is they have an element of self-improvement to them: she is actively helping her audience.

They focus on learning and teaching.

Adopt this learning culture in your panel discussion, and you will add more value for your audience.

Ask yourself whether your panel has answered these three questions:

By keeping the practical take aways in mind, you will be create a panel discussion that is both effective and memorable. 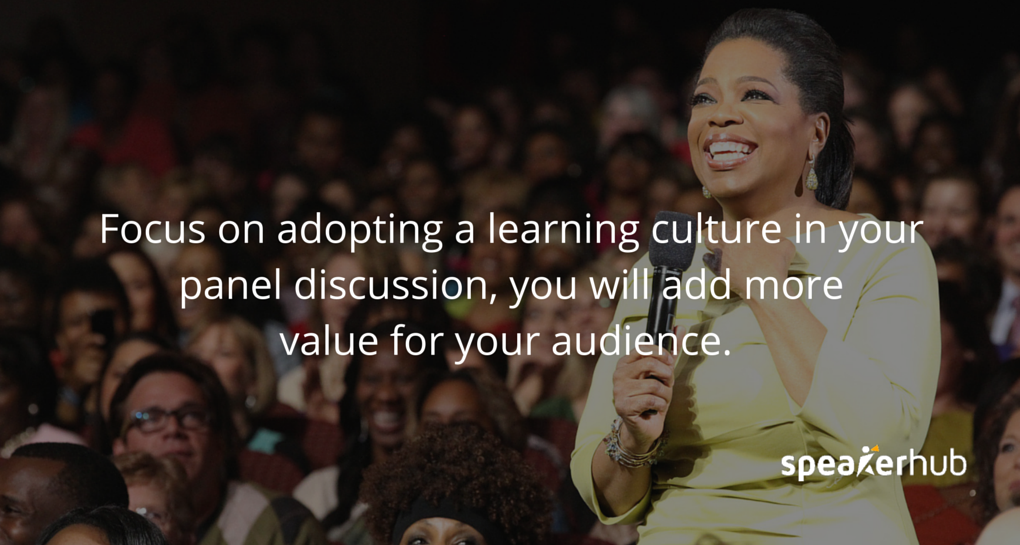 The ultimate reading list: 50 great books that every speaker should read

SpeakerHub makes finding the right moderator for your upcoming panel easier, by showcasing the right people with the right skills. Find out more about our moderators here.

We would love your feedback on this article. Who inspired you most as a panel discussion moderator? Share your ideas with us here.