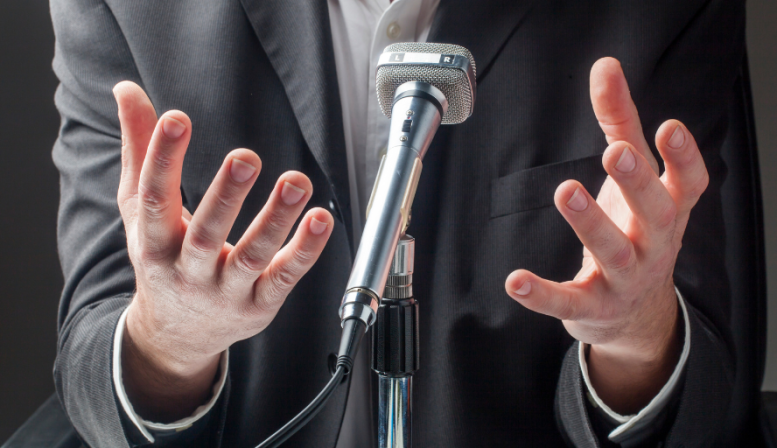 As public speakers, we all want to be as effective as we can be. That’s what allows us to deliver memorable presentations that add tangible value to our audience members.

The problem is that becoming an effective public speaker is easier said than done. Even with the tips that we’re about to share with you, there aren’t any shortcuts. You’ll need to spend a lot of time practicing your public speaking and testing out different approaches to figure out what works best for you.

So let’s dive in and take a look at what makes a public speaker effective.

Perhaps the single best thing that you can do to be an effective public speaker is to make sure that you’re conveying a simple message. The more you try to cram into your public talks, the more people will struggle to know what to take away with them. You should be able to break your aims down into a single sentence – otherwise, they’re too diffuse.

The rule of three

We’ve talked extensively about the rule of three in previous blog posts, and with good reason. It’s one of the most powerful tools that people have at their disposal to get their message across. The idea is that three is the smallest number of items that you can have in a series. Two isn’t enough to make a pattern, and four can be simplified to three. That’s why we remember famous examples like “Veni, Vidi, Vici” and “a government of the people, by the people, for the people.”

In writing circles, it’s generally a bad idea to directly address the reader, especially in fiction. That’s because it can take them out of the story and remind them that they’re consuming something. With public speaking however, this isn’t an issue. It’s a good idea to tap into storytelling techniques, and directly addressing the audience can help to bring them on-side and establish a sense that there’s a two-way dialogue and that you’re all in it together.

Even the best public speakers rely on visual aids. True, that doesn’t have to mean (yet another) PowerPoint presentation, but decent visuals will do a great job of providing people with something that they can remember once the show is over.

Passion is like self-confidence in that it also comes across in the way that people speak. It’s also not something that you can fake, whereas there are a few tricks for self-confidence that can help you to “fake it until you make it”. When it comes to passion, the only way to get this right is to go out of your way to ensure that you’re delivering talks on something that you’re passionate about.

Towards the end of your talk, you’re going to want to spend a couple of minutes recapping what you’ve talked about and summarizing the main concepts that you want people to take away with them. As with the first point, you’ll want to avoid over-complicating this, and you can also combine this with the second point to leave them with three core ideas that you want them to remember.

Q&As at the end

It’s rare for even the best public speakers to deliver a keynote that’s so clear and concise that people are left without any questions. That’s why question and answer sessions are so commonly a part of public speaking engagements. Be sure to schedule time for them, and cover yourself by jotting down a list of commonly asked questions so that if nobody in the audience has anything to ask, you’ve still got something to talk about in those final minutes.

Mingle with the audience

After your session is over, try to stick around for a while to mingle with the audience and chat to anyone who wants to speak with you. Not only is this great for networking, but it’ll help you to answer any final questions that you didn’t get to or to provide some support to people who were too shy to raise their hands.

This final point is another one of those that can’t be faked. Simply put, practice really does make perfect, and so the more you practice public speaking, the better you’ll become. This is true both for public speaking as a whole and for individual talks and presentations. Don’t become one of those speakers who thinks they’re so good at what they do that they no longer need to practice. When leading cellist Pablo Casals was asked why he continued to practice for five hours a day at the age of 83, he is said to have replied, “Because I think I’m making progress.”

Now that you know a few of the things that can make a public speaker effective, it’s over to you so that you can put what you’ve learned today into practice.

Remember that, as with most things, practice makes perfect, and so the more you’re able to take on public speaking assignments, the better you’ll become at delivering effective and memorable public speeches.

Now that you’ve heard from us, we want to hear from you. What are some of the techniques that you’ve used to become more effective? Be sure to let us know in the comments so that we can keep the discussion going.

I provide dynamic talks customized to your audience with actionable takeaways.