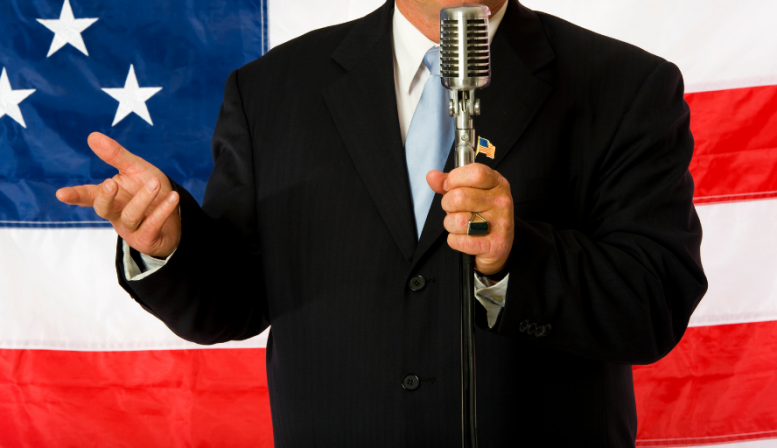 There’s a lot that we can learn from US presidents. After all, being able to convey a message through speech is a necessary prerequisite if you want to be a successful presidential candidate, and you can bet that every US president gets a certain amount of training and support from some of the most skilled communicators on the planet.

We’re used to seeing presidents on television and in the news, and so there’s a temptation to take them for granted. We tend to tune them out, unless they’re talking about a subject that we have a personal or vested interest in, and that’s a shame because it means missing out on a huge amount of insight and inspiration.

And so with all of that in mind, in today’s blog post, we’re going to take a look at US presidents and to identify just a few of the lessons that they have to offer for would-be public speakers. Let’s dive in and get started.

What You Can Learn About Public Speaking from US Presidents

1. The rule of three

The rule of three is an open secret in public speaking, and we’ve talked about it in a previous article that’s worth checking out if you want to know more. Broadly speaking, the idea is that it’s easier for us to remember information when it’s delivered in groups of three.

A classic example of the rule of three is Julius Caesar’s “Veni, Vidi, Vici”, meaning, “I came, I saw I conquered.” In the US, we’re perhaps more familiar with the concept of “life, liberty, and the pursuit of happiness.” Either way, it’s a powerful way to get your point across, and it’s popular amongst everyone from presidents to politicians and public speakers.

It’s not just US presidents who use evocative language. It’s a common theme to all of the best orators, because it helps people to better picture what’s being talked about. When we can visualize complex ideas and affairs of state, we can better understand them and make more informed decisions.

For example, the Gettysburg Address, which is one of the most famous speeches in history, consisted of just 271 words and included phrases like, “These dead shall not have died in vain” and that “government of the people, by the people, for the people, shall not perish from the earth.”

And did you notice that this also uses the rule of three?

3. Speak to the people

This one might seem like an obvious tip to begin with, but when you dig a little deeper, it starts to make a lot of sense. The best-loved presidents go out of their way to make people feel seen and acknowledged, tailoring the way they talk to the audience that they’re addressing. If they’re speaking to college professors, they’ll talk very differently to how they’d talk to engineers or emergency workers.

Varying the way that you speak to match your audience just makes sense, and it should be no surprise that it helps to encourage people to hang on to your every word and to absorb your message. Speaking directly to people will also help you to remember that you’re talking to individual people rather than thinking of the crowd as just one impersonal mass.

US presidents often work with dedicated speechwriters who can do the research and the drafting for them and present them with something that’s going to help them to get their message across. It’s up to them whether or not they use it, but it’s an important part of briefing that can make a big difference once the cameras are on them and they start talking.

Unfortunately, most of us don’t have access to the resources that presidents can tap into, and we usually need to do the writing and the research ourselves. That’s fine, as long as you make sure that you go ahead and do it. Just writing out a script for your presentation can help you to formulate your ideas and ensure that when you actually deliver it, you nail it.

Slogans help to win elections, which is why every presidential campaign comes with its own slogan, whether it’s Lincoln’s “Honest old Abe” or FDR’s “Happy Days Are Here Again”. More recently, we saw “Make America Great Again” and “Yes We Can”.

Slogans are powerful because they do the same thing that the rule of three does, taking a complex idea and making it more memorable. It also creates a sense of camaraderie, because if people recognize and use the same slogans as you, it almost feels as though you’re members of an exclusive club.

There’s a reason why marketers use slogans to sell their products. Don’t let them have all of the fun and find ways to use slogans in your public speaking engagements to better be remembered by your audiences.

6. Connect the past and the present

The past is important to us, because where we come from influences where we’re going. US Presidents have always made a point of connecting the past to the present, in part because that’s what gives their position so much weight in the first place.

At the Gettysburg Address (if you’ll forgive us for reusing an example), Lincoln opened with the line, “Four score and seven years ago, our fathers brought forth upon this continent a new nation, conceived in liberty and dedicated to the proposition that all men are created equal.” In Barack Obama’s second inaugural address, he referred to “our allegiance to an idea articulated in a declaration made more than two centuries ago”.

Connecting the past to the present in your public speeches is a great way to tap into the weight of history and to show that there’s a precedent for the subjects that you’re talking about. It also means that you can show that your arguments are tried and tested and that even after the passage of time, they’re still relevant.

7. Build a sense of community

In that same speech, President Obama also used the phrase “we, the people” five times, and he avoided using the singular “I” in favor of the plural “we”. These techniques are designed to foster a sense of community and togetherness, implying that “we’re all in this together”.

By creating this sense of community, you make it easier to get your audience on-side. Once they’re on-side, they’ll become much more receptive to your messages and you’ll find that they’re hanging on to your every word.

You won’t be able to use this to convince people to believe something that they don’t want to believe, but you will find that your job is made a whole lot easier.

The world's most amazing motivational speaker: what we can learn from Gandhi