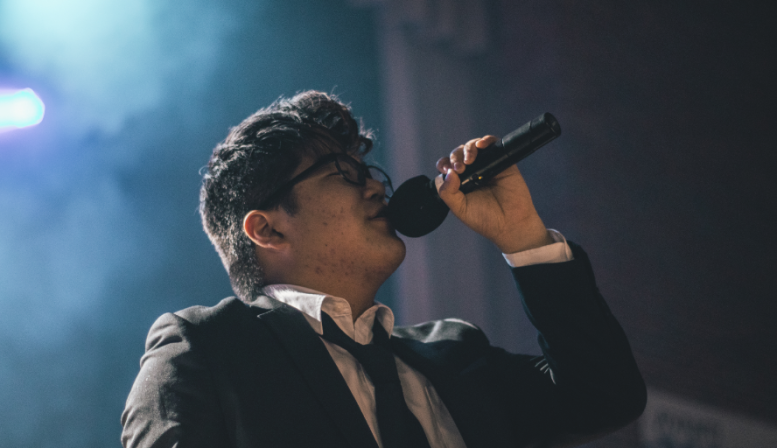 Some stars have some pretty crazy habits that they do before every single performance. Take a look at this loopy list: 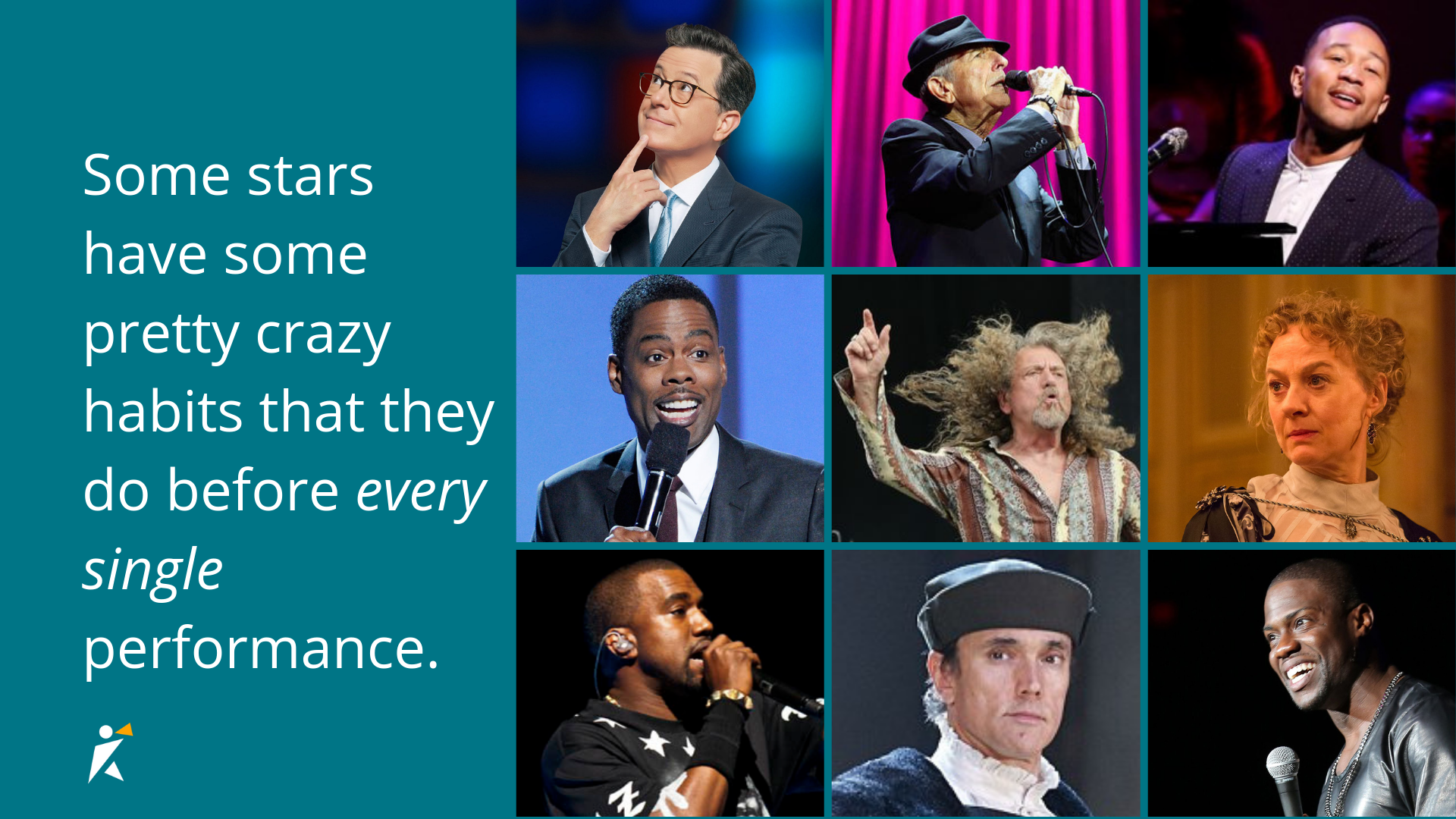 While it might sound like these actors, singers, comedians, and bands are slightly unhinged, they aren’t alone.

Is it just a matter of superstition, or does having some sort of pre-performance ritual or warm-up serve some purpose?

Today we are going to look at some of the main ideas from Daniel McGinn, author of Psyched Up: How the Science of Mental Preparation Can Help You Succeed*, We’ll explain why so many professionals use pre-performance rituals, and how they can help.

If you are too relaxed and you get on stage, you could bore your audience. Perhaps you leisurely stroll on stage, talk in a monotone at a slow pace, you take long pauses and sometimes it can seem like you’ve forgotten why you are there and why it is important? Your laid backness can easily come across as unenthused.

On the other hand, if you are overstressed, your anxiety is running amok and you are flustered and overwhelmed, you are likely to speak too rapidly with shaky body language, making you come over as unprofessional or inexperienced, or just plain difficult to understand.

In between these two extremes is the optimal amount of excitement and energy that you need to be on stage.

Vanessa Van Edwards, from the Science of People, calls this The Stress Curve.

Too little stress = not enough energy

Too much stress = too much energy 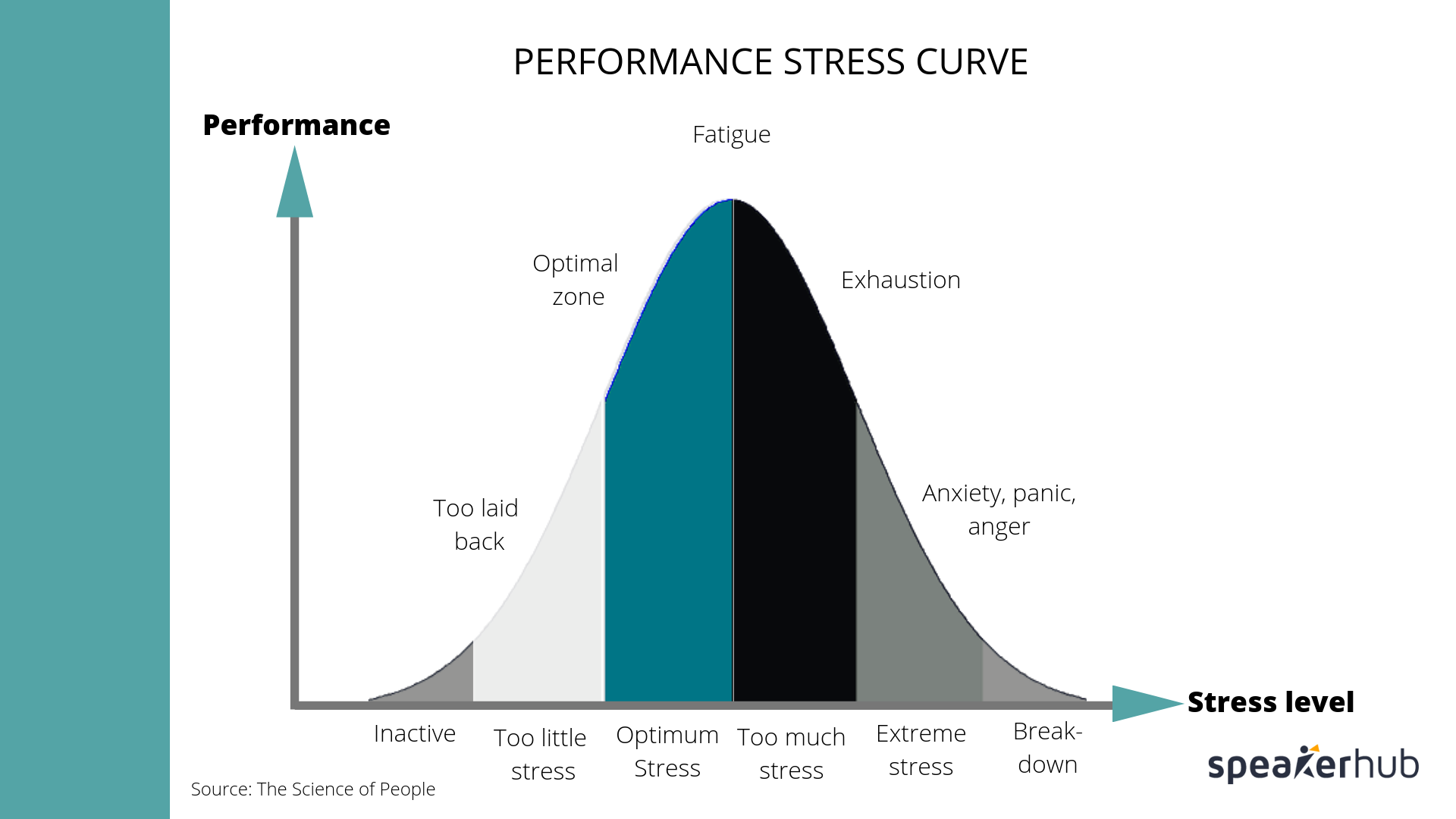 You want to get centered right in the optimal stress section.

If you are the type of person who tends to stress out easily and often, suffer from pre-performance anxiety, you need to calm down and bring your stress level down to the optimal level.

If you are the type of person who is super relaxed and can sometimes come off as unenthusiastic, uninterested, or even boring, you need to bring your energy up, get your heart pumping, get excited, and get up to the optimal stress level.

This is where pre-performance rituals come in.

What is a pre-performance ritual?

It is any type of routine or habit a performer, athlete, or professional does to enhance their performance, get into the right mindset, and combat anxiety. 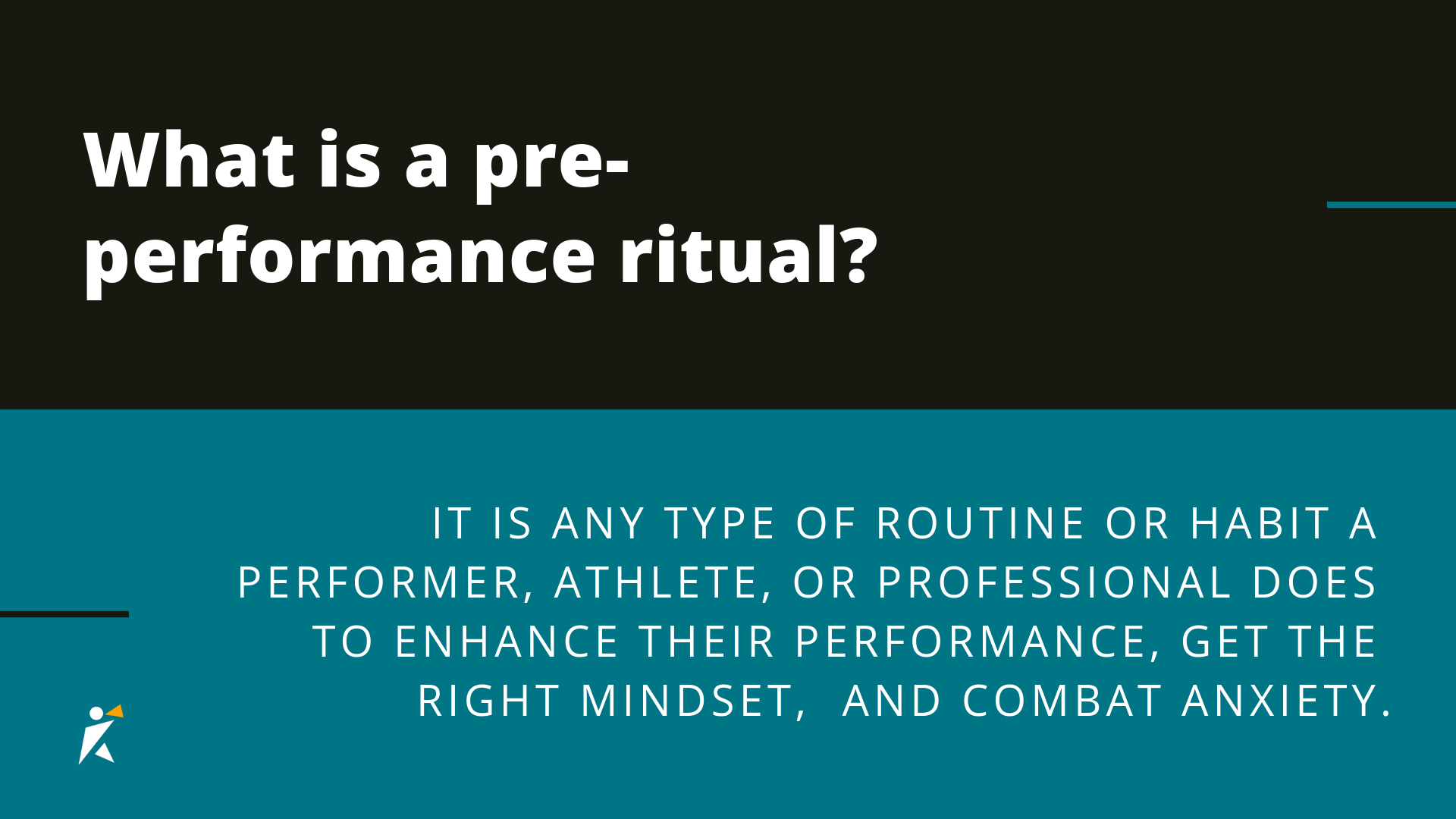 As you can see from the list earlier, they are very personal and range from doing hundreds of jumping jacks to sitting quietly listening to the sounds of nature.

Professionals use them to prepare themselves so that they can give better performances, and while it may seem superstitious, McGinn explains that there is already a lot of research, mostly in sports and social psychology, that suggests that people who practice pre-performance rituals perform better. It psyches them up and helps focus their energy and concentration. It helps bring them into their optimal performance zone.

People in non-athletic fields, such as professionals who speak in front of large crowds (including CEOs, panel moderators, comedians, keynote speakers, actors, and MCS), those who sell products and pitch projects, litigate, negotiate, or have to perform any high-stakes activity, can use pre-performance rituals to do their jobs better.

The pre-performance rituals get you into the optimal stress-level, and psychologically set you up for success. Negative thoughts can cloud cognition, leaving a speaker struggling to be able to come over positively, clearly, and passionately.

The thing about your routine is that it needs to be individual to you. Just because chewing on a pen helps Stephen Colbert doesn’t mean it will help you.

Take the time to try different things and let them develop over time. Don’t be afraid to make adjustments or scrap something that didn’t work. Don’t feel like you are restricted to the same routine. If, for whatever reason, it has stopped working, try something different.

Here are some ideas on how to develop a routine. 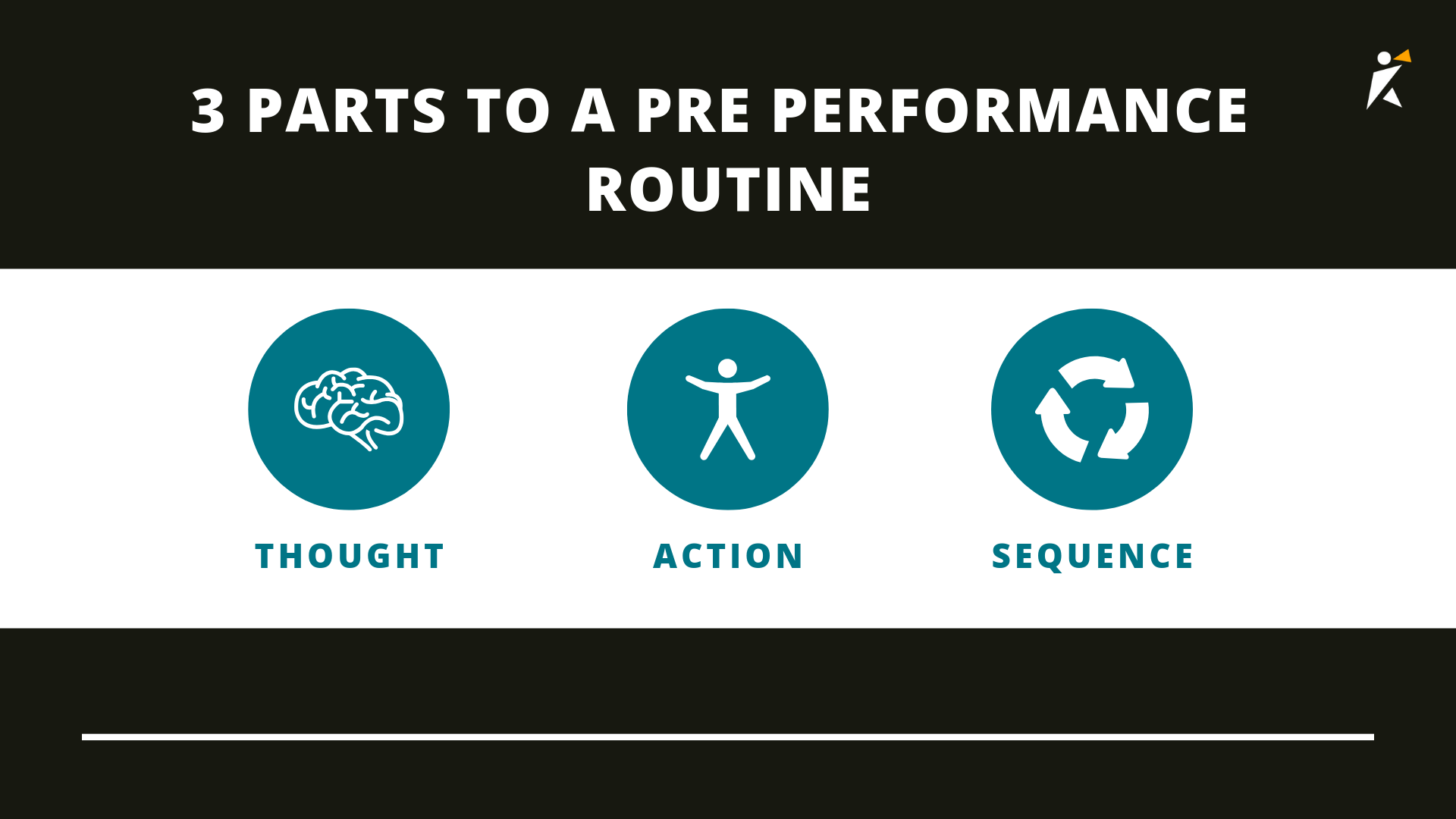 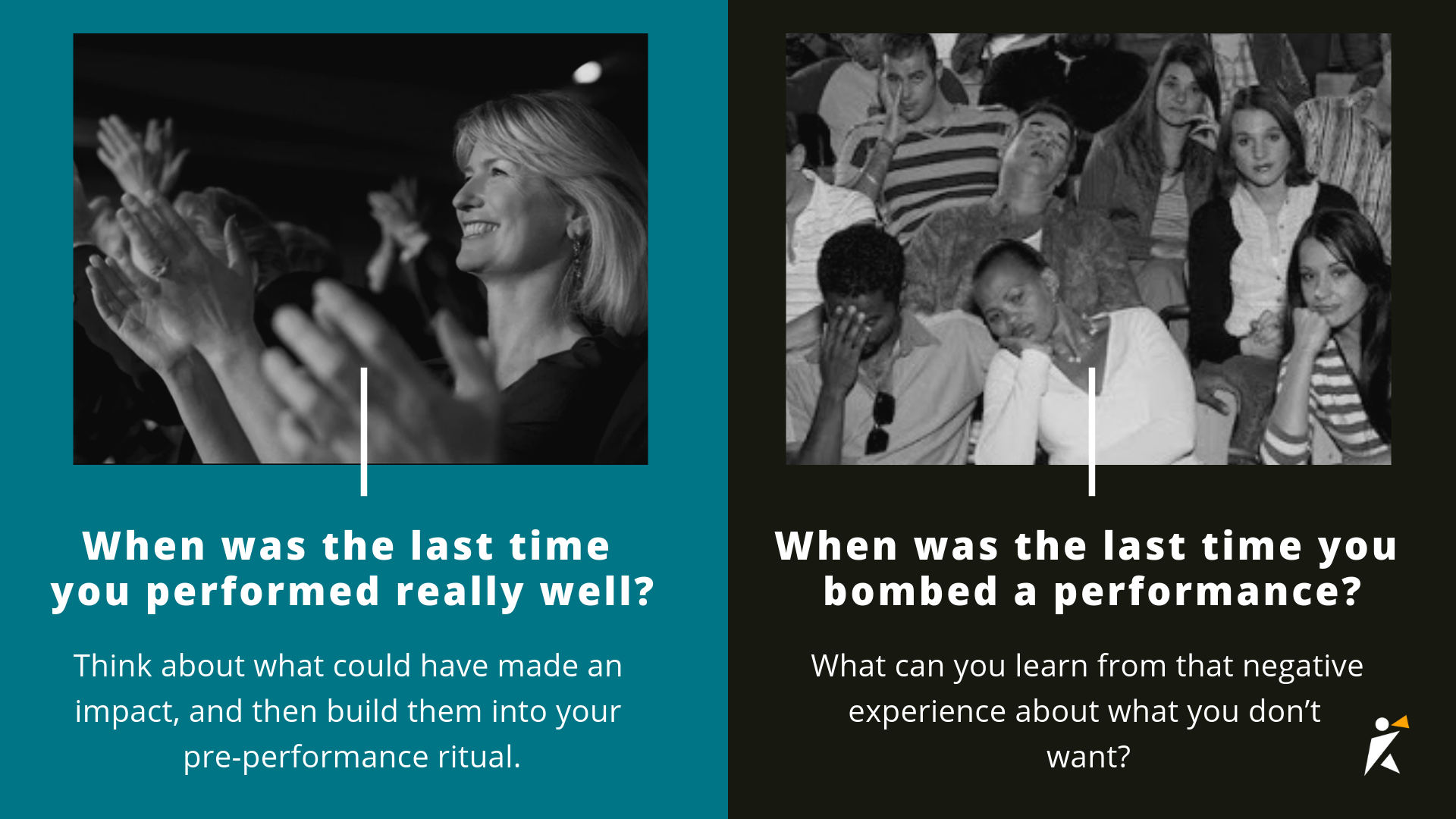 Think about the last time you performed really well.

What was your mental state beforehand?

What did you do that day that might have contributed to that mental state?

Maybe you had gone for a long jog in the morning and felt clear and energetic?

Maybe you had a relaxing lunch with a colleague who congratulated you on how well you’d been doing lately?

Think about what could have made an impact and then build that into your pre-performance ritual.

Now, when was the last time you bombed a presentation?

Not because your audience was rubbish or there was a problem with your slides, but where you were not in the right headspace?

Maybe it was because you were running late and felt rushed and flustered?

Maybe it was because it was a much bigger audience and you psyched yourself out?

What can you learn from that negative experience about what you don’t want?

Read the book: Daniel McGinn, author of Psyched Up: How the Science of Mental Preparation Can Help You Succeed*

Read this article for more ideas on what element you can add to your routine: How to Psych Yourself Up Before Your Next Big Thing

Studies have shown that athletes perform better when they practice a ritual or routine before they perform, and there is mounting evidence that the same method can work for a variety of professionals, including professional speakers.

Whether you choose something quiet and meditative that will calm your nerves, or something high energy that will get your blood pumping and your brain firing at all cylinders, having a pre-performance routine can help you channel the right energy to your audience and improve your performance.

*Please note that this is an affiliate link.

We work with organizations that want to achieve immediate Rock Star Results!

I'm a high energy practitioner (vs academic, theoretician) who has done everything I talk about.