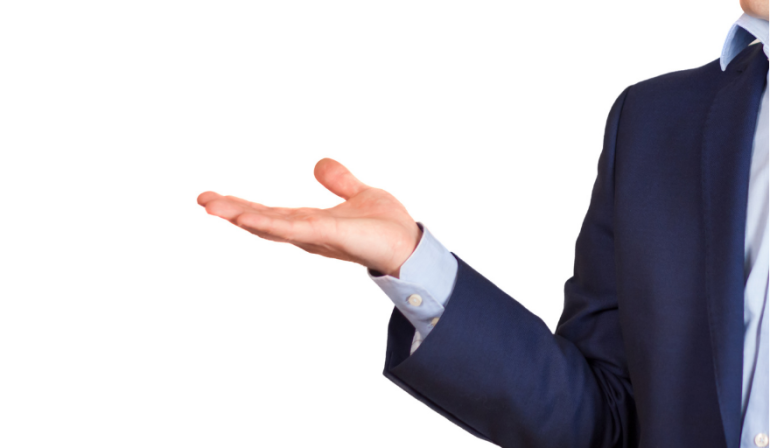 In one of our recent posts, we took a look at body language  and how you might be sending out signals to your audience that you’re not even aware of. We also shared a few body language tips that you can use to improve your communication skills and to make your public speaking engagements more memorable.

Today, we’re going to build on that by taking a look specifically at our hands and the way that we use them. We’ll cover some of the common gestures that you can use to get your point across, as well as sharing a few tips on what not to do.

A word of warning, though. It may feel as though certain gestures are universal, but that’s not always the case. You should always consider your audience, and adapt if necessary to avoid an embarrassing faux pas.

For example, in most countries, putting your thumb up is a sign of approval, or it’s used to mean “okay”. In parts of Africa and the Middle East, though, it’s an offensive gesture that’s similar to sticking your middle finger up in the U.S.

We’ll talk a little more about what not to do later on, but before we get to that, let’s take a look at a few ways you can use your hands to good effect.

What to Do with Your Hands While Speaking in Public 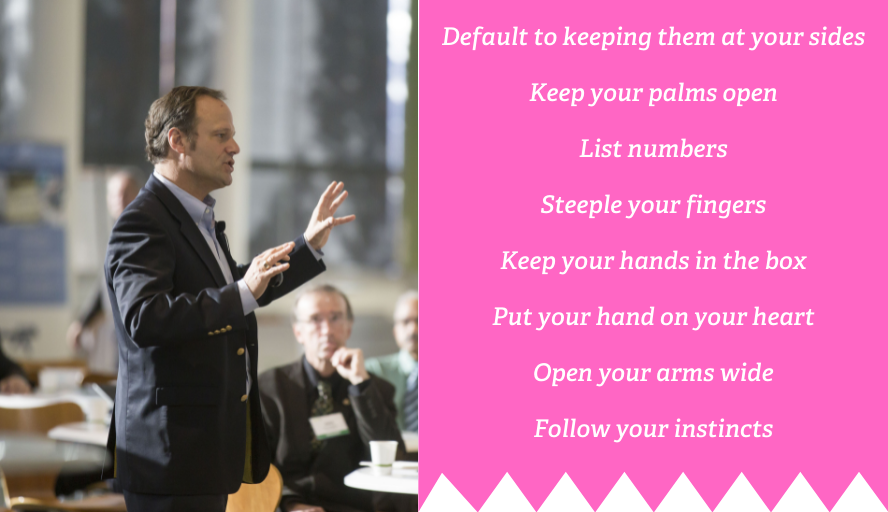 1.  Default to keeping them at your sides

Keeping your palms open and showing them to the audience is a great way to build trust, and it even has an evolutionary background. In the early days of humanity, it was how we showed people that we weren’t carrying tools or weapons and that we didn’t pose a threat.

This handy little gesture is universal and can be used to great effect if you combine it with the rule of three, which we talked about in a previous post. The idea is to use the digits of your fingers to keep track as you count through points.

This is the gesture that The Simpsons’ Mr. Burns uses when he says “excellent”, and it’s typically associated with power and authority. One study found that people like lawyers, accountants, and investors, who didn’t generally use a lot of gestures, would often steeple their fingers when they were feeling confident.

5.  Keep your hands in the box

Picture a box that stretches from each of your shoulders to each of your hips. Now think of this box as your communication zone. If you keep your hands within this area, you help to ensure that the focus of attention is on you.

6.  Put your hand on your heart

This is one of those universal gestures that works all over the world and which shows people that you’re speaking from the heart and believe in what you’re saying. It can be super effective if you use it sparingly, but be careful not to overdo it because that can end up working against the very sincerity that you’re working to establish.

When you open your arms wide, as though you’re about to give someone a hug, it suggests that you’re welcoming people into your inner circle. It can be a great way of building trust amongst people and creating a sense of inclusiveness.

If you’re ever in doubt, just follow your instincts. There’s a reason why we have those instincts, and you should bear in mind that we’ve been communicating with our body language for millennia, way before we had the luxury of learning more about it through science. If your instinct is to do something with your hands, it’s probably a good idea, unless it clashes with our tips on what to avoid in the next section.

What Not to Do 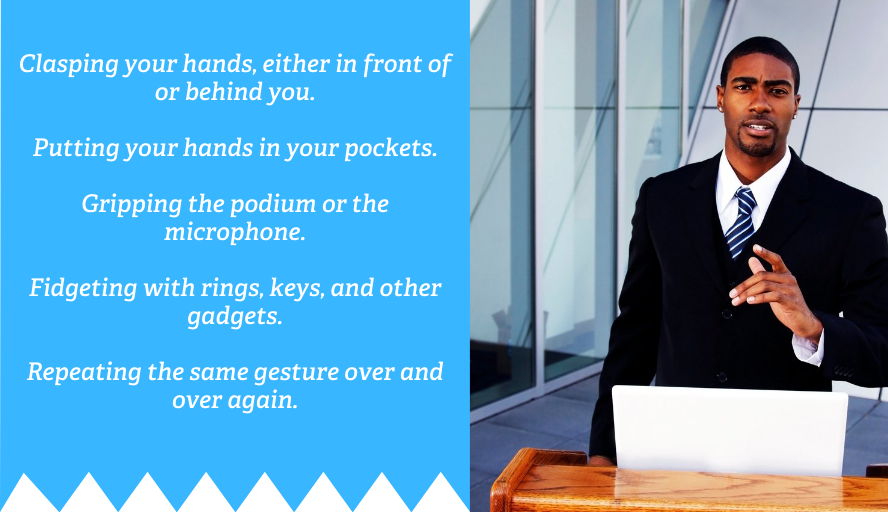 One thing to bear in mind is that doing the right things isn’t enough, and you also need to know what not to do. This is true of most things in life. For example, when you’re learning to drive, as well as being taught what to do, you’re also taught not to reverse before checking behind you. And when you’re trying to be healthy, you need to not eat junk food as well as getting some exercise.

When it comes to public speaking, there are a number of mistakes that we commonly see among novice public speakers:

Quitting these bad habits isn’t easy, and you need to put a certain amount of conscious effort in if you want to avoid them. At the same time, it can be difficult to cut out a bad habit completely, and it's often easier to replace bad with good.

Public speaking isn’t easy, but then skills worth having always have to be worked for. You’ll feel much more accomplished as a speaker if you stick at it and overcome the hurdles to deliver effective presentations. And believe it or not, anyone can be a good public speaker, given enough training and practice.

The tips that we’ve shared today should be enough to set you out on the right path, but there’s no substitute for getting out there and practicing. If you’re worried about your hands, try practicing your talk in front of a mirror or recording yourself and watching it back to see what you’re doing right—and wrong.

And remember to keep working at it, as there’s always room for improvement. Good luck! 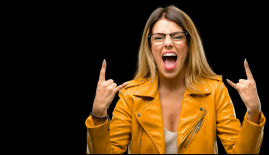 Where will a "rock on" sign offend your audience? Plus 9 other gestures to avoid internationally

I can solve your quiet quitting & burnout problems through connection, direction, and inspiration.